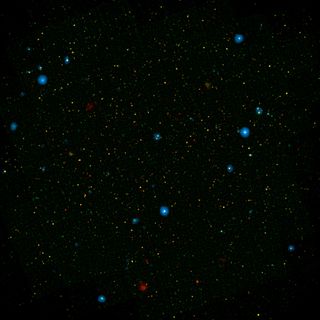 Although this music's melody is easily identified by scientists, the individual singers have long remained obscure. Now, new data from NASA's Nuclear Spectroscopic Telescope Array (NuSTAR) spacecraft has begun to identify some of the voices.

"We knew this cosmic choir had a strong high-pitched component, but we still don't know if it comes from a lot of smaller, quiet singers, or a few with loud voices," study co-author Daniel Stern, NuSTAR project scientist at NASA's Jet Propulsion Laboratory in Pasadena, California, said in a statement. "Now, thanks to NuSTAR, we're gaining a better understanding of the black holes and starting to address these questions." [Gallery: NuSTAR, NASA's Black Hole Hunting Space Telescope]

As black holes' powerful gravity pulls in surrounding gas and dust, some of this material is heated and accelerated to nearly the speed of light. This process unleashes powerful X-ray bursts that sing across space, creating what astronomers call the cosmic X-ray background.

NASA's Chandra X-ray Observatory has managed to identify many of the black holes carrying the melody, but the most energetic objects with the highest-pitched voices have continued to blend into the crowd.

That's changing, however, thanks to NuSTAR.

"We've gone from resolving just 2 percent of the high-energy X-ray background to 35 percent," Fiona Harrison, NuSTAR principal investigator and lead author of the new study describing the findings, said in the same statement. "We can see the most obscured black holes, hidden in thick gas and dust."

Most (if not all) galaxies contain supermassive black holesat their centers. Although the Milky Way's black hole is relatively quiet today, it must have gobbled up a great deal of "food" in the past to grow to its present size — about 4.5 million times the mass of the sun, previous observations found.

The new study, which has been accepted for publication in The Astrophysical Journal, will help astronomers understand how black hole feeding patterns change over time, the researchers said.

NuSTAR is the first telescope capable of probing the high-energy X-ray songs of black holes. It has revealed a black hole bounty since its 2012 launch.

"Before NuSTAR, the X-ray background in high energies was just one blur with no unresolved sources," said Harrison, a professor at the California Institute of Technology. "To untangle what's going on, you have to pinpoint and count up the individual sources of the X-rays."