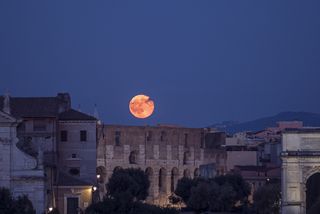 A skywatcher looked up at the full moon 47 years after Neil Armstrong took his epic "small step" on the lunar surface to capture this stunning image. Italian astrophysicist Gianluca Masi took the image on July 20 from Rome, Italy.

"I managed to capture this image, showing the Full Moon rising above the Coliseum in Rome, on the very night of the Apollo 11 landing  (July 20, 1969)," Masi wrote in an email to Space.com.  He runs The Virtual Telescope Project 2.0 from Rome.

On July 16, 1969, NASA astronauts Neil Armstrong, Buzz Aldrin and Michael Collins launched toward the moon atop a mighty Saturn V rocket. Four days later, on July 20, Armstrong and Aldrin landed their Eagle lander at Tranquility Base on the moon as Collins remained in orbit aboard the command module. [Apollo 11: A Moonshot Memory Pop Quiz]