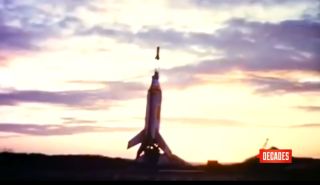 A TV documentary set to premier today (July 20) will tell the incredible story of the first moon landing, which took place 47 years ago today.

The documentary, called "Go: The Great Race," will air four times today on the Decades TV Network, as a special episode of the show "Through the Decades." A trailer for the documentary leads off with footage from President John F. Kennedy delivering his famous 1961 speech that called for the U.S. to put a man on the moon and return him safely by the end of the decade.

"He had no reason to believe that we could even come close to doing something like that," says one of the documentary's interviewees (supposedly someone who worked on the Apollo program), referring to Kennedy's challenge.

The trailer gives the impression that the documentary will focus on the technical challenges faced by the people who worked on the Apollo program — there are lots of dramatic shots of test rockets exploding and schematic drawings of space capsules. There appear to be an extensive number of interviews with people involved with the Apollo program, including Jim Lovell, commander of the ill-fated Apollo 13 mission, and Buzz Aldrin, one of the people who made that first trip to the lunar surface.

The documentary "utilizes the unrivaled archives of CBS News to relive the race to the moon from Sputnik and Mercury to Gemini and Apollo," according to a statement from the network.

In addition to the documentary, the Decades network will be airing program related to the moon landing anniversary all day long.

"The full day celebration of the moon landing on DECADES continues with The Dick Cavett Show and his 1995 interview with director Ron Howard as they discuss the movie Apollo 13. Next, One Small Step pays tribute to the first man on the moon Neil Armstrong," the statement said. The network will also air "two imaginative space themed episodes of The Twilight Zone, followed by an episode of the ultimate space exploration TV show, 'Star Trek.'"

To find out where you can find the Decades network in your area, check the company's website.