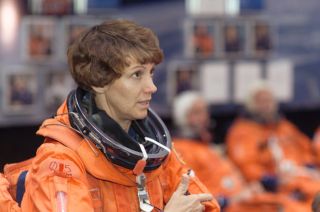 Retired NASA astronaut Eileen Collins, who commanded shuttle missions in 1999 and 2005 and spent more than 36 days in space during her career, is scheduled to address the RNC tonight during the 7 o'clock hour (EDT; 2300 GMT). You can watch her speech on any of the cable news channels.

Collins has criticized the Obama administration's 2010 cancellation of NASA's moon-oriented Constellation program, as Space News noted last week. (Obama directed the space agency instead to work to get astronauts to a near-Earth asteroid by 2025, and then on to Mars by the end of the 2030s.) [Giant Leaps: Top Milestones of Human Spaceflight]

But Collins said her speech tonight will not be political.

"I will be talking about how the Apollo program inspired Americans to rally behind a cause: John Kennedy’s challenge to land a man on the moon and return him safely to Earth by the end of the decade," Collins told Mashable in a statement. "We landed on the moon 'in peace, for all mankind,' and I know that is a message we can all get behind."

The theme of tonight's speeches is "Make America First Again," according to RNC materials. Also speaking tonight, among others, are former Speaker of the House Newt Gingrich and Texas Senator Ted Cruz, both of whom have expressed strong feelings about space exploration and NASA's priorities.

For example, Cruz — a climate-change skeptic who chairs the Senate's Subcommittee on Space, Science and Competitiveness — has said that NASA should spend more money on space exploration and less on Earth-science studies.

And Gingrich made news during his presidential run in 2012 by promising that the United States would have a permanently crewed moon colony up and running by 2020 if he won the election. (Gingrich lost the Republican nomination that year to Mitt Romney.)

Collins, 59, became an astronaut in July 1991. In February 1995, she piloted the space shuttle Discovery during its STS-63 mission, becoming the first female shuttle pilot. She also piloted the STS-84 mission of Atlantis in May 1997, then served as commander of the STS-93 flight of Columbia in July 1999 and the STS-114 mission of Discovery in July-August 2005.

STS-114 marked the space shuttle program's return to flight following the loss of Columbia during re-entry to Earth's atmosphere on Feb. 1, 2003, a tragedy that claimed the lives of all seven astronauts onboard.

Collins retired from NASA in May 2006. She was inducted into the U.S. Astronaut Hall of Fame in 2013.