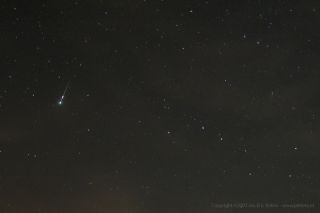 A Kappa Cygnid meteor appears near the Big Dipper as seen from near Havelte in the Netherlands on Aug. 14, 2007.
(Image: © Jan Eric Krikke)

Anyone gazing at the summer night sky for even a short length of time is likely to spot a few "shooting stars."

Nobody really knows why, but meteor activity is far richer in the second half of the year. Seven of the 10 generally recognized "principal" annual meteor showers, for example, occur after July 1.

The best summer meteor show happens around the nights of Aug. 11 and Aug. 12, when the annual Perseid shower peaks. The Perseids are capable of producing 60 to 90 fast, bright meteors per hour.  This year should be a very good one for the Perseids, partially because there will be no bright moonlight interfering, as it had done in past years, and also because Earth might encounter a heavier-than-normal concentration of meteoric debris. [Perseid Meteor Shower 2016: When & How to See It]

The Perseid display isn't the only meteor show going on this summer, however; a number of minor displays will be active at various times in July and August. Between Aug. 3 and Aug. 15, for example, no fewer than six different smaller showers will present skywatchers with a wide variety of meteors of different colors, speeds and trajectories.

You can learn more about these six showers below. But first, a few notes.

Five of the six appear to emanate from the region of sky around the constellations Aquarius and Capricornus, both of which are currently highest in the southern sky between roughly 1 a.m. and 3 a.m. local daylight time. Keep in mind, however, that you don't need to stare at a single patch of sky to see meteors; shooting stars can appear anywhere, so feel free to let your eyes wander.

Also, remember that the best meteor viewing comes in the predawn rather than the evening hours. This is because observers are on the "trailing" side of Earth in the evening, as a result of the planet's motion through space. Any meteoric particle, therefore, must generally have an orbital velocity greater than that of Earth to "catch" us. However, after midnight — when viewers are on the Earth's "leading" side — any particle that lies along the planet's orbital path will enter the atmosphere as a meteor.

In the case of annual meteor showers, these particles are bits of debris shed over the years by comets. Such debris collides with Earth's atmosphere at speeds of 25,000 mph to 162,000 mph (40,230 km/h to 261,000 km/h). This tremendous energy of motion dissipates in the form of heat, light and ionization, creating the short-lived streaks of light popularly known as shooting stars. [Meteor Shower Quiz: How Well Do You Know 'Shooting Stars'?]

Now, onto the minor showers:

Alpha Capricornids: This display runs from July 3 through Aug. 15 and peaks around July 30. Hourly rates are rather low — only around four or five meteors — but the Alpha Capricornids can still be dramatic, featuring bright, slow and long-tailed meteors, some of which graduate to the status of fireballs.

South Iota Aquarids: Running from July 25 through Aug. 15, these meteors are generally faint and of medium speed, producing only one or two per hour at their Aug. 4 peak.

North Delta Aquarids: This shower is active from July 15 until around Aug. 25. It produces one to three meteors per hour on the Aug. 8 peak night.

Kappa Cygnids: This would be a really good shower to watch if it produced a higher volume of meteors.  The Kappa Cygnids appear from Aug. 3 through Aug. 25, and peak on Aug. 18 with just one to three per hour. But Kappa Cygnid meteors are a sight to behold — slow-moving, and sometimes brilliantly bright. Some reports describe shower members as rivaling the moon in brightness. And the constellation Cygnus — these meteors' apparent source — is passing directly overhead during the late evening hours.

North Iota Aquarids: This display runs from Aug. 11 through Aug. 31, producing one or two meteors per hour at the Aug. 20 peak.

The moon lends a hand

The moon shouldn't affect summer meteor viewing much this year. The dazzlingly bright full moon of July 19 will wane to last quarter on July 26. Beginning on July 27 and running all the way through the first half of August, the moon will pose little more than a minor hindrance. The only meteors that will suffer because of a bright moon this year are the Kappa Cygnids, which will peak on the night of the August full moon.

The only equipment you'll need to view these lesser showers are your eyes and a modest amount of patience. As one long-time meteor enthusiast once noted, "Meteor observing is relaxing and enjoyable, potentially dramatic, and just plain fun!"

In early August, Space.com will publish a comprehensive viewer's guide for the upcoming Perseid shower.