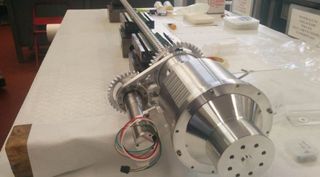 Leonardo-Finmeccanica will build a drill for the Euro-Russian Luna-Resurs mission, now scheduled for launch in 2021. ESA officials plan a series of lunar missions with Russia, and satellite builder SSTL is designing a mission to provide commercial telecommunications services.
(Image: © ESA)

FARNBOROUGH, England – The European Space Agency's penchant for a major lunar exploration program that would precede a full-scale exploration of Mars was fully in evidence on July 12 with the signing of a contract to put an ESA drill on Russia's Luna-Resurs lunar lander.

On July 8, the president of the French space agency, Jean-Yves Le Gall, reiterated his view that what's going on at NASA and in the U.S. private sector, notably with SpaceX of Hawthorne, California, make it more likely that human missions to Mars will occur sooner than the 2030s.

French scientists have long preferred Mars to the moon as an exploration destination and CNES has participated on nearly all the NASA-led Mars missions in recent years.

But during the Farnborough Air Show here, ESA and European industry officials laid out a lunar exploration program that could give long-missing teeth to ESA Director-General Johann-Dietrich Woerner's Moon Village concept.

To those – particularly in the United States – who view the moon in "Been There, Done That" terms, ESA's Human and Robotic Exploration Director David Parker had this too say:

"Apollo only visited the equatorial regions when we knew nothing about water being in the deep, shadowed crevasses of the lunar south pole," Parker said. "The Moon is like a museum of 4.5 billion years of solar system history. So far, we've basically only been to the gift shop in the entrance hall. We've not really explored the exciting places."

Parker and Norman Bone, managing director of airborne and space systems at Italy's Leonardo-Finmeccanica, signed a contract valued at slightly more than 8 million euros ($9 million) to develop a prototype for ESA's Prospect drill and laboratory. Prospect is scheduled to fly aboard Russia's Luna-Resurs mission, formerly in 2020 and now scheduled to launch in 2021.

A full construction contract for the Prospect drill, which Leonardo is developing with Britain's Open University, is expected in 2018. The hardware is designed to penetrate more than 1 meter below the lunar surface to look for water.

ESA will be asking its member states in December to a full-blown exploration program that encompasses ESA's participation in the International Space Station and both the lunar and Mars exploration initiatives.

ESA's ExoMars orbiter is scheduled to enter Mars orbit in the autumn and to deploy a lander to the Mars surface in October. An ExoMars rover, partially built and scheduled for launch in 2020, awaits additional financing at the December conference of ESA government ministers. ExoMars is also a Euro-Russian program.

Going from a prototype to integration aboard a Russian lander in time for a launch in 2021 is a tight schedule, but Parker said the Prospect drill borrows heavily from the ExoMars rover's drill and Europe's Philae lander, which set down on Comet 67P in 2014 after separating from ESA's Rosetta comet-chaser satellite.

More recently, ESA has adopted a similar procedure for its Earth observation missions. An Earth Observation Envelop Program budget is approved every few years, after which expert teams debate which missions to approve.

Parker's goal is to extend this model to exploration. ESA governments in December are likely to signal their approval of continued International Space Station participation alongside NASA, Russia, Japan and Canada until 2024. The station likely will take most of whatever the total exploration budget is.

Other than the lunar program, ExoMars 2020 is the only firmly decided ESA exploration mission.

Parker said ESA would ask its governments for 65 million euros for the lunar missions.

The Russian space agency, Roscosmos, has suffered sharp budget cutbacks, raising questions about whether the Russian side will be able to meet its schedule commitments. Parker said he was confident.

"Our Russian colleagues are pressuring us to finalize all the agreements to go ahead with the project," Parker said. "They seem to be pretty confident on their side."

An example of how far the thinking has gone about targeting the moon came July 12 with the announcement by small-satellite specialist Surrey Satellite Technology Ltd. (SSTL) of England and England's Goonhilly Earth station Ltd. of a partnership to provide commercial navigation and data-relay services for lunar missions.

The small satellites would be deployed to provide communications for lunar missions, with the Lunar Pathfinder providing data transfer to Earth and the Goonhilly ground station, which is upgrading an existing antenna in Cornwall to serve as a piece of a future deep space communications network. SSTL and Goonhilly are working under ESA contract to study commercial partnerships in exploration.

"You remember what they say about the California Gold Rush, that the only people who made money were those selling shovels?" Sir Martin said. "We are content to play that kind of role in lunar exploration – not the glory stuff, but the communications infrastructure."

Chris Saunders, an SSTL mission concepts engineer, said communications would be done in X- and UFH frequencies and that the Pathfinder mother ship could carry several satellites on a commercial basis for any nation or institution interested in lunar exploration.

SSTL has started talks with the Indian Space Research Organization about a launch of the Pathfinder aboard India's PSLV rocket.