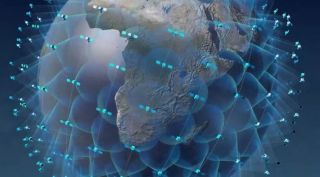 The OneWeb global Internet-delivery constellation includes 720 150-kilogram satellites in orbit — 40 in 18 orbital planes. One year after kickoff and initial financing, the OneWeb Satellites joint venture that is building the satellites says it has passed preliminary design review and about to complete its subcontractor lineup.
(Image: © OneWeb)

The next step, he said, is a design-to-manufacture period to be followed by production of the first 10 pilot satellites, to be built at Airbus Defence and Space's production facility here.

The 10 pilots will be launched aboard a Europeanized Russian Soyuz rocket in late 2017 and then tested in orbit before full-scale production of the remaining 890 satellites is committed. [Satellite Quiz: How Well Do You Know What's Orbiting Earth?]

One year after the program's formal kickoff following OneWeb’s securing $500 million in funding from prospective partners and suppliers — ncluding Airbus — de Santignon said the basic OneWeb satellite design and performance requirements have been confirmed, with no major issues so far.

Another OneWeb official said the commitments from contractors so far has kept OneWeb to within 5 percent of its original cost target for the space segment.

OneWeb's entire architecture, including a network of gateway Earth stations, is expected to cost $3.5 billion even if OneWeb Satellites — a joint venture of Airbus and OneWeb — makes its cost target of $500,000 or less per satellite produced from the Exploration Park, Florida, facility selected earlier this year.

A 900-satellite order is unheard-of in the satellite industry and is one reason why OneWeb Satellites sought the participation of non-space companies. But de Saintignon said the automotive sector, for example, proved not to be a good fit.

"They were interested in supporting us, but it was impossible for them," de Saintignon said at the Toulouse Space Show. "For the automotive industry, a pre-series production is 1,000 items. For us, that's our full series. So there are not the same methods, the same rules, that apply for other industries."

As a result, most of the contractors selected have a background in the space industry. But many of them will be required to create entirely new production lines, or revamp existing facilities, to meet OneWeb's aggressive schedule and production volume.

The volume alone is unprecedented. For example, the 900 satellites will require the production of 15,000 solid-state power amplifiers, more than have been launched in the history of the satellite industry, de Saintignon said. The contracting team will need to glue 540,000 inserts for the honeycomb panels used for the satellite structure. Contractor Sodern will build 1,800 star trackers, two per satellite.

For now, OneWeb founder Greg Wyler and other OneWeb officials say their prospective customers want deployment to occur as quickly as possible and that, for now, they are not giving any thought to slowing down.

With the notable exception of MDA Corp. of Canada, none of the second-ground contractors have made equity investments into OneWeb, but several of them have invested pre-contract to prepare for what's coming.

One subcontractor official said each company needs to decide how much it needs to invest now to make the OneWeb schedule, and how much investment can be deferred given the fact that OneWeb has raised only around 15 percent of the system's estimated capital cost.

Wyler has said since the July 2015 kickoff that the $500 million in equity, plus the internal investment being made by OneWeb contractors, is enough to carry the company through 2016. After that, further funding will be needed.

In addition to their own internal resources, several French companies have received funds from a government bond issue devoted to new technologies, with a special carve-out for technologies needed for future satellite constellations.

The government backing, while modest, has had an outsize importance because of its timing, de Saintignon said.

For the subcontractors, OneWeb Satellites has designed the contracts in two phases: development and production.

"For some of the space subcontractors this means starting a new production line, including starting with us in Toulouse and in Florida," de Saintignon said. "The development part of the contract is to produce an early product and the processes [for future full-scale production] so that we can qualify it all together. Then the production phase would begin.

"We signed all these to get the full commitment of suppliers. But we are a startup in the sense that the program still has to be funded. We are on the way and we are convinced we will get there."

One sweetener for OneWeb contractors is that, if the project succeeds as planned, the Florida production facility will position itself as prospective supplier for any satellite system that wants relatively small, inexpensive spacecraft.