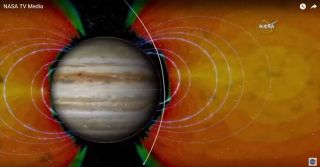 PASADENA, California — The stakes and the risks are high for a NASA spacecraft's long-awaited arrival at Jupiter tonight (July 4).

The Juno probe is scheduled to enter orbit around Jupiter tonight at 11:53 p.m. EDT (0353 GMT on Tuesday), after a crucial 35-minute engine burn. If something goes seriously wrong with this maneuver, Juno will sail right past the gas giant, and 15 years of mission planning will go out the window.

Juno will perform the burn on autopilot; it currently takes light 48 minutes to get from Earth to Jupiter, so there's no way to command such a maneuver in anything close to real time.

But Juno, which launched in August 2011, won't be in the clear even if the engine burn goes well. The solar-powered probe will be pointed away from the sun during this maneuver, and it must re-orient itself quickly in the aftermath.

"The whole game is, get back to the sun before you run out of battery," said Juno principal investigator Scott Bolton, of the Southwest Research Institute in San Antonio. "We've got to get blood flowing through Juno's veins again."

If all goes according to plan, Juno should begin pointing back toward the sun at 12:07 a.m. EDT (0407 GMT), mission officials said.

The successful execution of such maneuvers is never guaranteed, and the extreme conditions at Jupiter will add a few extra layers of difficulty for Juno tonight.

For example, the radiation environment around the giant planet is the harshest and most intense in the solar system. Juno will have to withstand swarms of potentially damaging electrons accelerated to nearly the speed of light by Jupiter's magnetic field, which is 20,000 times more powerful than that of Earth.

"The minute they hit that spacecraft, they will ricochet and create shrapnel of photons and other particles, which will then scatter," said Heidi Becker of JPL, leader of Juno’s radiation-monitoring team. "And that's what gets in and degrades the electronics."

Juno's core electronics are protected by a 400-lb. (180 kilograms) titanium vault, which should keep them safe. But the team isn't taking anything for granted; the spacecraft will fly through the harshest part of Jupiter's radiation belts just as the engine is firing up for the orbital-insertion burn, Becker said.

Indeed, Juno will be exposed to the equivalent of 1 million dental X rays just during the orbital-insertion maneuver tonight, she added.

"So, think about Juno tonight," Becker said. "And send a big wish, too."

Jupiter is also girded by a dusty ring of debris. This structure isn't nearly as large or well-defined as Saturn's famous ring system, but it does harbor particles that could potentially harm Juno, especially considering how fast the probe will be moving tonight. (Jupiter's gravity will accelerate the spacecraft to a top speed of about 165,000 mph, or 265,000 km/h, around the time of the engine burn — faster than any human-made object has ever traveled, mission team members have said.)

In addition, Juno's engine door will be open, with the engine nozzle facing forward, for the orbit-insertion burn, Bolton said. And the probe will be zooming through the densest part of the ring system in the middle of the burn, he added.

"Any dust that's in our way and hits that nozzle, it'll knock a hole right through the coating that protects the nozzle and allows the engine to burn uninterrupted," he said, stressing that the probability of such a collision is nonetheless low. "So, that's one of the big gambles."

Bolton said he's nervous about tonight's events. But he's confident that the mission team has prepared sufficiently, everything will go well, and Juno will soon be able to begin its 18-month science mission to study Jupiter's magnetic and gravitational fields, composition and internal structure.

The spacecraft's observations should help researchers better understand how the king of planets formed, and, by extension, how the entire solar system came together, Bolton said.

"We're going to conquer that thing tonight, and we're going to get the answers we're all seeking about the beginning of our solar system," he said.