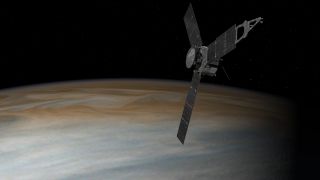 The key event Monday is a 35-minute engine burn at 11:18 p.m. EDT (0318 GMT on Tuesday), which is designed to slow Juno down enough to be captured by Jupiter's powerful gravity.

If something goes seriously wrong with this burn, the solar-powered Juno will zoom right past the gas giant, and the science goals of the $1.1 billion mission — which include mapping the gravitational and magnetic fields of Jupiter, and characterizing its internal structure — will go unachieved. [Photos: NASA's Juno Mission to Jupiter]

Here's a primer on how Juno's highly anticipated Jupiter arrival should go down Monday night, along with a few notes about what to expect from the mission over the longer term. (Note: All times below are "Earth-receive times" — i.e., when confirmation that maneuvers occurred will be received by Juno's handlers in mission control. It currently takes 48 minutes for light to travel from Jupiter to Earth, so the actual maneuvers happen 48 minutes before Earth-receive time.)

9:16 p.m. EDT (0116 GMT) Monday: Juno begins slowly turning away from the sun and toward its orbit-insertion orientation. Another, faster turn toward this orientation begins at 10:28 p.m. EDT (0228 GMT). (These maneuvers and all other aspects of the orbital-insertion plan are pre-programmed; the spacecraft has been on autopilot since June 30.)

10:41 p.m. EDT (0241 GMT): Juno switches over to its low-gain antenna, which the probe will use to send status-updating "tones" during the night's maneuvers, and fine-tunes its orbit-insertion attitude.

10:56 p.m. EDT (0256 GMT): The probe boosts its spin rate from 2 to 5 revolutions per minute (RPM) to increase its stability for the orbit-insertion burn.

12:16 a.m. EDT (0416 GMT): The probe starts beaming detailed telemetry information (not just tones) back to Earth. It will likely take about 20 minutes to lock onto Juno's signal, mission team members have said.

1 a.m. EDT (0500 GMT): NASA and Juno team members will hold a news conference to provide an update about how the orbital insertion went.

Juno's nine science instruments were switched off last week in the lead-up to Jupiter arrival. Mission team members will begin turning them back on about 50 hours after orbital insertion, NASA officials have said.

These instruments will be calibrated and then used to study Jupiter over the next three months, but Juno won't be ready to begin its official science mission until it performs one last engine burn on Oct. 19. If all goes according to plan, this 22-minute maneuver will shift Juno into a highly elliptical, 14-day orbit around Jupiter.

The spacecraft will then observe the huge planet over the course of more than 30 orbits, gathering data that scientists hope will shed light on how, when and where in the solar system Jupiter formed.

Juno is scheduled to end its life with an intentional death dive into Jupiter's atmosphere in February 2018 — a maneuver designed to ensure that the spacecraft doesn't contaminate the potentially life-hosting Jovian moon Europa with any Earth microbes.

You can learn much more about Monday's orbital-insertion maneuver and the Juno mission in the press kit here: http://www.jpl.nasa.gov/news/press_kits/juno/