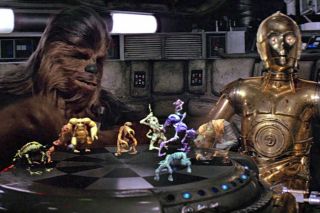 A long time ago, in a galaxy far, far etc., filmmaker George Lucas introduced the noble game of holochess. You might remember the scene from the original Star Wars movie (see the video clip below).

In a happy Star Wars Day development, the original designer of that iconic scene has announced plans to create a real-life version of the game, reports Engadget.

The Animals Behind the Sounds of Star Wars

Special effects artist Phil Tippett is partnering with veterans of LucasArts video game studio to develop HoloGrid: Monster Battle, based on the holographic chess game from the "Star Wars" universe. In addition to appearing in the original film, holochess has popped up in novelizations, video game adaptations, and last year's series reboot "Star Wars: The Force Awakens."

With today's Kickstarter campaign launch, Tippett and his team plan to eventually develop an augmented reality game based on the holochess concept. While the technology for genuine freestanding holograms is still a ways off, the design team is hoping that augmented reality can provide a convincing approximation.

Meanwhile, in its first iterations, HoloGrid will function as a kind of hybrid of tabletop, card and mobile games. The Kickstarter campaign has been set up to fund a version of the to be played on smart phones and tablets.

By way of a technique called photogrammerty, Tippett's physical creature sculptures will be scanned into the game's digital 3-D environment. The idea is to evoke the look and feel of the classic "Star Wars" scene, which was filmed with old-school stop-action animation and primitive optical effects. The design team hopes to eventually move the game into full-fledged AR (augmented reality) and VR (virtual reality) platforms like the Oculus RIft.

Was 'Star Wars' Right? Can We Walk On Most Exoplanets?

Tippett and the gang are aiming to raise $100,000 for the first phase of what they hope will be a whole new genre of tactical holographic combat-chess games. Hard to argue with that.

Whatever happens, it's probably best to keep Han Solo's advice in mind. Let the Wookiee win.