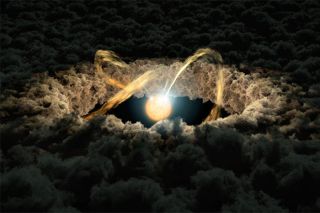 This illustration shows a young star, erupting with magnetism, surrounded by a protoplanetary disk.
(Image: © NASA/JPL-Caltech)

Often, stars are too distant for us to make any sense of their surroundings. But in the case of baby stars, surrounded by protoplanetary disks, there's an ingenious trick astronomers can use to examine the structure of their dusty birthplaces.

A star may form from a molecular cloud of gas that, should the conditions be just right, collapses under a mutual gravity. This collapse will form a knot of dense material that may fuse to produce the core of a young star. Over time, material will collect around this protostar, forming a swirling disk. Eventually, planets will coalesce from this protoplanetary disk. For us to better understand how the planets in the solar system formed, astronomers are very curious about studying the disks around other stars.

"Understanding protoplanetary disks can help us understand some of the mysteries about exoplanets, the planets in solar systems outside our own," said postdoctoral research associate Huan Meng, of the University of Arizona, Tucson. "We want to know how planets form and why we find large planets called 'hot Jupiters' close to their stars."

Unless young star systems are on our interstellar doorstep, it can be hard for the structure of these disks to be seen.

However, by studying the fluctuations of brightness of a star called YLW 16B, approximately 400 light-years from Earth, Meng and his collaborators were able to detect reflected starlight from the innermost boundary of the star's protoplanetary disk, making extremely precise measurements of its location and structure.

PHOTOS: The Most Mind-Blowing Space Spirals

This particular star is of approximately the same mass as our sun, but it is only 1 million years old (compared to our 4.6 billion year-old sun, this star isn’t much more than a stellar embryo). This makes it an ideal candidate to better understand the physics of our solar system before any planets began to form around the young sun.

Using data from NASA's Spitzer space telescope, which observes the cosmos in infrared light, and from ground-based observatories, the astronomers applied a technique called "photo-reverberation" to study the starlight bouncing off the protoplanetary disk's inner edge.

It just so happens that YLW 16B has a variable and unpredictable fluctuation in emissions, so the astronomers measured these emission fluctuations and waited for the reflected light to bounce off the disk. The variations in star brightness could then be matched with the light echo, which arrived shortly after. The time lag could then be used to derive the distance of the star from the protoplanetary disk's inner edge.

For this star system, the gap between star and inner disk is around 0.08 AU — where 1 AU, or astronomical unit, is the average distance between the sun and Earth's orbit. As a better comparison, the inner edge is approximately one quarter of the distance that Mercury orbits the sun.

These observations were also able to deduce that the disk was thick, providing an interesting additional clue as to how much material the disk may contain.

Young stars are bright and possess powerful stellar winds that "blow-out" the inner protoplanetary disk, leaving a gap (as illustrated by the image, top). Understanding how big this gap is and its location from the star will help us improve models of baby star systems, ultimately teaching us a little about how our solar system may have formed 4.6 billion years ago.