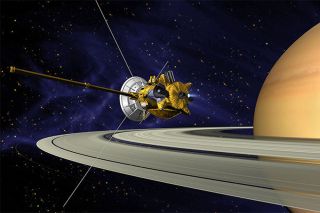 Artist's impression of Cassini in orbit around Saturn.
(Image: © NASA)

Any mention of the possibility of a hypothetical world orbiting in the outer solar system and the tabloid press assumes the worst: the world is going to explode. Even worse, when a scientists hinted that one such hypothetical planet could trigger mass extinctions via a cometary bombardment, the headlines jumped to the conclusion that, oddly, we were all going to die this month.

Most of these silly imaginings can be quickly dispatched by using an ounce of logical thought, but since the announcement in January of the possible detection of a world well beyond the orbit of Pluto, all manner of ideas have emerged as to "Planet 9"'s impact on the solar system.

In this most recent "Planet 9 might do strange stuff" episode, scientists of the Observatoire de la Côte d'Azur and Observatoire de Paris pondered the effects of Planet 9's gravitational field on the orbit of NASA's Cassini mission, which is currently minding its own business orbiting the ringed gas giant Saturn. Their work has been published in the journal Astronomy and Astrophysics.

Astronomical history is littered with examples of the discovery of worlds by looking at their gravitational impact on other planets in the solar system. Indeed, by looking at the orbital perturbations of Uranus, astronomers in the mid-19th century were able to precisely locate Neptune. So, should there be a massive (yet so-far undiscovered) planet in the outer solar system, could its presence be detected by Cassini's instrumentation?

NEWS: 9th Planet May Lurk in the Outer Solar System

Alas, seeing an opportunity to highlight how unlikely this would be, NASA has gone on the record to say that nope, Planet 9 isn't messing with their Saturn probe.

"Although we'd love it if Cassini could help detect a new planet in the solar system, we do not see any perturbations in our orbit that we cannot explain with our current models," said Earl Maize, Cassini project manager at NASA's Jet Propulsion Laboratory in Pasadena, Calif, in a news release.

"An undiscovered planet outside the orbit of Neptune, 10 times the mass of Earth, would affect the orbit of Saturn, not Cassini," added William Folkner, a planetary scientist at JPL. "This could produce a signature in the measurements of Cassini while in orbit about Saturn if the planet was close enough to the sun. But we do not see any unexplained signature above the level of the measurement noise in Cassini data taken from 2004 to 2016."

ANALYSIS: The Hunt for Planet Nine: What's It Made Of?

It's certainly an interesting thought, but at least in this case it appears there is little evidence of gravitational tugs on the orbit of Cassini.

Still, the hunt for Planet 9 goes on.

As revealed by Caltech astronomers Mike Brown and Konstantin Batygin in January, there seems to be something out there that is tugging at the orbits of distant objects in the Kuiper belt — the region of icy objects beyond the orbit of Neptune (a region within which Pluto lives). Currently, it is thought this as-yet to be directly seen planet is around 10 times the mass of the Earth and at least 200 AU (200 times the sun-Earth distance) from the sun. If and when discovered, this significantly sized "mini-Uranus" will be the furthest-known object in the solar system.

How many more surprises remain hidden on our cosmic doorstep?