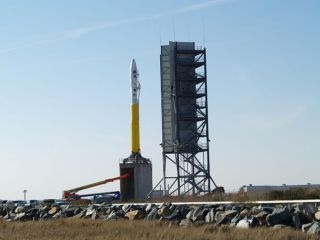 ATLANTIC, Va. (AP) - Thelaunch of a rocket carrying two satellitesfor the Air Force and NASA wasscrubbed early Monday because of a problem with the flight software, officialssaid.

The mission, which wouldhave included the first takeoff from the mid-Atlantic region's commercialspaceport, will be postponed until at least Wednesday - and possibly for aslong as two to three weeks - while the problem is being resolved, said NealPeck, program manager for the Air Force's TacSat-2satellite.

Peck described the problemas an "anomaly with the spacecraft flight software.'' That problem, firstdiscovered Sunday night, would have prevented one of the satellites fromgetting enough power in space to conduct all its experiments.

"Rather than me standing infront of you in a few hours saying we have a serious problem with a spacecrafton orbit, we've caught it up before we've gone up,'' Peck said from NASA'sWallops Flight Facility, where the spaceport launch pad is located.

The 69-foot Minotaur Irocket was to blast off at 7 a.m. EST, carrying the TacSat-2, designed to testthe military's ability to transmit images of enemy targets to battlefieldcommanders in minutes, a process that now can take hours or days.

Peck said the glitchoccurred in software that controls the pointing of the satellite toward thesun, which helps it use solar rays for battery charging. The panels are 45degrees off.

"So we would not bereceiving sufficient power to the spacecraft to power all our systems and toconduct all our experiments,'' Peck said.

Also aboard the rocket wasthe NASA'sshoebox-size GeneSat-1 satellite, which carries a harmless strain of E.coli bacteria as part of an experiment to study the long-term effects of spaceon living organisms. The results could be useful for NASA's mission to Mars.

The Mid-Atlantic RegionalSpaceport, or MARS, is one of only six federally licensed launch centers in thecountry. The Air Force will pay the spaceport $621,00[0] for the launch,spaceport director Billie Reed said Sunday.

The Virginia CommercialSpace Flight Authority, a state agency created in 1995, built the launch pad in1998 on land leased from NASA on Wallops Island on Virginia's Eastern Shorepeninsula. Maryland later joined the commercial venture.