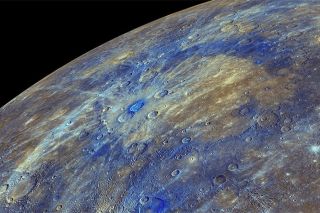 Enhanced color image highlights Mercury’s low-reflectance material, which appears blue in this image, and its association with impact-excavated material. The young rayed crater Degas appears near the center, and to the far left is the crater Akutagawa, whose extensive low-reflectance (dark blue) material was studied by MESSENGER and found to be carbon rich.
(Image: © NASA/Johns Hopkins University Applied Physics Laboratory/Carnegie Institution of Washington)

In its final orbits, MESSENGER not only confirmed that Mercury's dark hue is due to carbon, but also revealed that the carbon wasn't deposited by impacting comets, as some researchers suspected.

Instead, scientists now believe they are seeing remnants of the planet's primordial crust, which likely formed when a global ocean of super-heated magma cooled, allowing minerals to solidify.

Computer simulations and experiments show that most of these crystallized minerals would sink — with one key exception. Graphite, the studies show, would float.

Scientists used an instrument on MESSENGER called a neutron spectrometer to make low-altitude measurements of the darkest regions on the planet's surface, which were suspected of having the most low-reflectance material (LRM.)

"The measurements showed enhanced fluxes of thermal neutrons over three areas of LRM, so only graphite as the darkening agent fits both the spectral reflectance observations and the neutron measurements," MESSENGER's lead scientist Sean Solomon, with Columbia University, wrote in an email to Discovery News.

Scientists also were able to match the carbon-rich material with large impact craters, evidence that the material stemmed from deep within Mercury's crust and was exposed after an impacting body gouged out a crater.

"Because LRM deposits on Mercury are all associated with material excavated from depth by large impact craters, they must come from the mid to lower crust," Solomon said.

Scientists estimate the ancient crust was about .62 mile, or 1 kilometer, thick.

The crust of present-day Mercury has been bashed by impacts, covered with lava, melted and otherwise disturbed.

"The processes … would dilute any primordial crust," physicist Patrick Peplowski, with Johns Hopkins University Applied Physics Lab, and colleagues write in a paper published this week in Nature Geoscience.

"This inference adds to our deepening appreciation that Mercury formed from a portion of the early solar nebula that was chemically much more reduced and was rich in other volatiles (such as sulfur, sodium, potassium and chlorine) compared with the portions of the nebula well sampled by Venus, Earth and Mars," Solomon said.