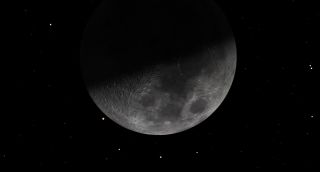 As you gaze at the first-quarter moon this week, you may wonder when the last-quarter moon will occur this month. But there won't be one, if you live in North or South America.

Take the situation in eastern North America, which is in the Eastern Standard Time (EST) zone. The previous last-quarter moon was on Jan. 31 at 10:28 p.m. EST, and the next one will be on March 1 at 6:11 p.m.

The mathematics behind this is that the average synodic lunar month — from new moon to new moon — is 29.53 days long, while February is either 28 or 29 days long. So it is possible, even in a leap year like 2016, to have one of the four main lunar phases fall outside the calendar month of February. [Earth's Moon Phases, Monthly Lunar Cycles (Infographic)]

Other parts of the world, such as Europe, had a last-quarter moon this month early on the morning of Feb. 1.

We make a big fuss about the "Blue Moon," when there are two full moons in a month, but we don’t seem to notice when one of the lunar phases goes missing.

This raises the question of why our months vary so much in their number of days: 28 or 29 in February, 30 in April, June, September and November, and 31 in the other seven months. The problem is that the sun, moon and Earth don’t move to the tune of simple arithmetic.

The lunar month consists of 29.530589 days, and the tropical year (equinox to equinox) is 365.242190 days long. When the ancient astronomers attempted to construct a calendar with these bizarre numbers, they found that, literally, it did not compute.

Early astronomers divided the shape of a circle into 360 degrees. This seems like a strange number to us with our decimal system, but it made sense with a number system based on 12. It also came close to the number of days in a year, though not close enough. The year was divided into 12 months (a natural in a base-12 number system) of 30 days each — but that left the awkward 5-and-a-bit-days remaining.

Mathematicians struggled with this problem for thousands of years, until finally a papal commission in 1582 came up with a complex but elegant solution, known as the Gregorian calendar, after Pope Gregory XIII, who commissioned it.

In order to get the church’s feast days back in phase with the astronomical calendar, it was necessary to omit 11 days.

The Pope had the power to enforce the new calendar in Catholic countries, though there was a bit of grumbling about the 11 days, which went missing between Oct. 4 and Oct. 15, 1582. Just for fun, try entering Oct. 4, 1582, in a planetarium program like Starry Night, and then advance to the next day. You will find it is Oct. 15.

Naturally, England (along with its North American colonies) was one of the strongholds of the old Julian calendar, and resisted adopting the popish Gregorian calendar until 1752. By that time, the calendar used by the English was off by 12 days, so that Sept. 2, 1752, was followed by Sept. 14, 1752, in England and its colonies.

To avoid the missing-days problem, we now have a system of 30- and 31-day months, with poor February being stuck with making the whole thing fit. Thus, we have 29 days in February every four years, with a few exceptions to fine-tune the length of the year over the centuries. The result is that most months are a little longer than the lunar month, so they sometimes have two full moons (or other double phases). And February sometimes ends up missing a phase, as happens this year.

Editor's note: If you capture a stunning view of the moon or any other celestial sight and would like to share it with us and our news partners, you can send in images and comments to managing editor Tariq Malik at: spacephotos@space.com.