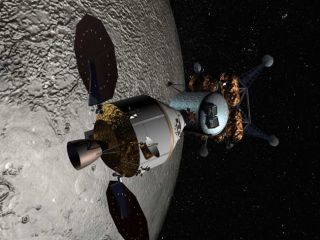 NASA’s 21st century return to the Moon will make use of Orion, the space agency’s Crew Exploration Vehicle. Shown here is Orion docked with a lunar lander in orbit above the lunar landscape.
(Image: © Lockheed Martin Corp.)

Progressis being made on defining a human mission to an asteroid. Experts at severalNASA centers are sketching out a prospective piloted stopover at an asteroid--atrek that could return samples from a targeted space rock as well as honingastronaut proficiency and test needed equipment for other space destinations.

Atthe heart of such a mission is drawing upon the technology of NASA'sConstellation initiative--the overarching program that is gearing up to extendhuman presence at the Moon, on Mars and beyond. One key ingredient is the Orionspacecraft--a post-Space Shuttle vehicle now under design to thrust crewsfurther than low Earth orbit.

Meanwhile,NASA is wrapping up a report required by the U.S. Congress on how best tosearch for, catalog and even deal with the hazard of Earth-bruising rocks fromspace. That space agency report is to be turned over to Congress by year's end.

Iflawmakers give the green light to a next generation Near Earth Object (NEO)search program, there could be 40 times the current discovery rate of thesecelestial bodies. By the time a human mission to an asteroid is ready, there'slikely to be a healthy list of suitable targets.

Match made in heaven

Afeasibility study to stage a human mission to an asteroid is underway, saidCarlton Allen, Astromaterials Curator and Manager of the AstromaterialsAcquisition and Curation Office at NASA's Johnson Space Center (JSC). "It wouldinvolve flying people to one of the NEOs and, among other things, collectsamples and bring them back," Allen told SPACE.com.

"Thereare many asteroids that have very low relative velocities with respect toEarth," Lu observed. Identifying an "ideal" NEO is one that's both slow movingand comes close to Earth - sort of a match made in heaven.

Lutold SPACE.com that NEO exploration study members are posing thefollowing question: How can already existing or currently planned Constellationhardware be used or minimally changed to permit other exploration agendas?

Constellationboosters and spacecraft hardware are now geared to support NASA's return to theMoon and onward to Mars plans. "The whole point of Constellation is that it isan exploration system," Lu noted. "So what else can you do?"

Lusaid that their report will be completed by the end of this coming January."We're in the midst of it right now...and it's looking interesting."

Ahuman voyage to an asteroid would not only trial run Orion equipment -particularly putting high-speed heat shield technology through its paces--butalso could become part of the test program for lunar landings, Lu said.

Moreover,NASA needs to wean itself off from Earth orbiting missions--round and round ourplanet with the space shuttle and International Space Station. Groundcontrollers are set up for essentially zero light-time, instantaneouscommunications with space crews.

Therewill be some lag time keeping in touch with future Moon explorers, and more sowhen expeditionary adventurers travel to faraway Mars, Lu advised. A NEOmission could help in the readiness of ground teams to work issues beyond lowEarth orbit, he said--stepping stone conditioning for robust lunar and Marsoperations.

Onceyou pull up to some asteroid...what's an astronaut to do?

"Thereare no handholds on the surface," Lu said. "It may not be a solid surfaceanyway."

Lusaid that an Orion spaceship would hover in close proximity to the NEO. "We'retalking about an object that's more than likely just 330 feet (100 meters)across, or less. We're talking a big rock or probably a big rubble pile, andlikely rotating."

Fromtheir spot in space, a crew could deploy a remotely-piloted vehicle. Lookingout spacecraft windows, an astronaut might fly a robotic probe via a joy stick,Lu envisioned, dropping off packages on the NEO or scooping up select samplesfor return to Earth.

"Ahuman flying something remote-controlled is way smarter than anything you canprogram. You could look for interesting spots on the asteroid and makereal-time decisions," Lu added.

ANEO mission would deepen NASA's quest for deep space experience, Lu said.There's interest in asteroids for a range of reasons, he continued, forexploration, for pure science, resource utilization, as well as learning how tomitigate the threat from a sniping space rock that has its crosshairs on Earth.

"Itbrings it all together," Lu concluded, "which is nice."

"We'relooking seriously at this," said Chris McKay, deputy scientist in theConstellation science office at JSC. He is stationed at NASA's Ames Research Center located in California's Silicon Valley, part of a studyteam there delving into the scientific output from a piloted asteroid flight.

NASAAmes officials are looking at how the Orion exploration vehicle could be usedfor a human mission to an NEO, McKay explained. The study is only about halfwaycomplete but initial results look to be positive, he said.

McKaysaid that the main question seems to be finding a NEO that allows for missionsthat are not too long.

Onceon station at an asteroid, crewmembers might release a probe to crash onto theasteroid as they watch from a distance, McKay added.

"Ahuman mission to a NEO, and the associated robotic probes, will return a lot ofscience and this will be valuable. But as a lifelong resident of Earth...I thinkthat being prepared to save the planet ranks higher on the priority list thaninsights into the formation of the solar system. But we can do both."

Asteroids: ready for them or not?

NASAattraction to asteroids comes from the top.

Spaceagency head, Mike Griffin, told an audience recently at NASA's Langley Research Center that "our specieshasn't been around long enough to have experienced a cataclysmic extinctionevent. But they will occur again, whether we are ready for them or not."

So,in the end, Griffin said, "human expansion into our solar system is fundamentally about the survival of thespecies, about ensuring better odds for our survival through the promulgationof our species."

"Butone assumption that I know will be justified is that the Moon, the near-Earthasteroids, and the rest of the solar system contain the resources that willtake mankind to the next level of civilization and prosperity. I don't knowwhen it will occur or who will do it, but it will happen. I hope that it willbe soon, and that we will be the agents of this great endeavor," Griffin explained.

"Thecliche that we should land on one or more asteroids 'because they are there'certainly applies, since the need to explore is an ancient and deeply-heldhuman trait," Burrows explained. "But more pragmatically, knowledge is neverwasted, so there will be things to learn from being on asteroids that we cannotanticipate but that can only be beneficial," he said.

Burrowssaid that resource mining in the distant future is part of that learning process.

"Butfar more important, it will teach us valuable things about them and the need tospread the human seed, not only for adventure, but as a hedge against acivilization-threatening catastrophe on the home planet," Burrows said.

Ina few months time, NASA is set to co-sponsor the 2007 Planetary DefenseConference to be convened in Washington, D.C.

TheMarch meeting is organized to capture the state-of-the-art in terms ofprotecting Earth from NEOs, said William Ailor of The Aerospace Corporation in El Segundo, California and general chairof meeting.

"Thereare a lot of unknowns relative to asteroids," Ailor said, like how they are puttogether - a key piece of information required in order to deflect anyEarth-threatening space rock. "One of the issues that you have is that there'sprobably some variability asteroid to asteroid."

Ailorsaid that piloted flight to an asteroid would yield additional detail ondealing with a future hostile object. However, the real challenge, he said, isthat no one country is going to have the wherewithal to cover every aspect ofthe problem.

Sothe question is, Ailor added, just how does the world community get together toincrementally add information about these objects and offer mitigation ideas?

"Ithink it's becoming more of a credible issue now. People recognize that thesekinds of events can happen...and we actually have the capability now to dosomething about it," Ailor suggested. "The [space] community--and I wouldinclude the political community--is beginning to take this more seriously. We'veprogressed a long way over the last few years...but we still have a long way togo," he said.