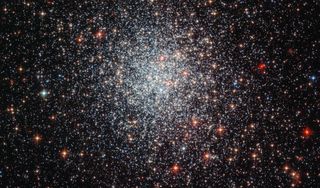 A view of the massive globular cluster NGC 1783 in the Large Magellanic Cloud, near Earth's own Milky Way, as seen by the Hubble Space Telescope. The cluster is 160,000 light-years from Earth and as massive as 170,000 suns.
(Image: © ESA/Hubble & NASA)

Clusters of stars can harvest enough gas from their galaxies to give birth to a new generation of stars of their own, new research shows.

This finding could help shed light on how the building blocks of galaxies evolve, scientists added.

Globular clusters are densely packed, spherical collections of up to millions of stars orbiting the outskirts of galaxies. These clusters are up to 13 billion years old, making them among the oldest structures in the universe. [Star Quiz: Test Your Stellar Smarts]

Stars in globular clusters are thought to all form at the same time in a single burst from a common cloud of gas. After that point, star formation ends in those clusters.

"In a star cluster, the first stellar generation usually contains very massive stars, and those very massive stars will contribute very high-energy photons — that is, X-ray photons — into their environment," Li told Space.com. "A cluster is initially gas-rich, but after that first batch of massive stars pours their energetic photons out, most of the gas will get accelerated and escape from the cluster. About 3 million to 10 million years later, the star cluster will be gas-free, hence quenching the star-forming process."

However, about a decade ago, astronomers discovered signs that old globular clusters, ones more than 10 billion years old, often possess younger stars. Now, Li and his colleagues said they have strong evidence that the reason globular clusters may have younger stars is that they experienced more than one star-forming event, or "starburst."

The researchers analyzed data from the Hubble Space Telescope regarding three globular clusters located in two dwarf galaxies orbiting the Milky Way. Two of the clusters, NGC 1783 and NGC 1696, are located about 160,000 light-years away from Earth in the Large Magellanic Cloud, and the third, NGC 411, is located about 190,000 light-years away in the Small Magellanic Cloud. NGC 1783 is about 180,000 times the mass of the sun, while NGC 1696 is about 50,000 solar masses and NGC 411 is about 32,000 solar masses.

The astronomers found that these globular clusters, which are each about 1.5 billion years old, are home to groups of stars a few hundred million years younger than other stars in the clusters. These younger stars make up about 0.2 to 2 percent the masses of those clusters.

One potential explanation for these apparent differences in ages is that these stars only look relatively young, but are in fact "blue stragglers." Such stars look younger due to an infusion of extra fuel they get after they either siphon gas from their neighbors or swallow other stars whole. However, the colors and locations of these younger stars are not what one would expect of blue stragglers from previous work, the researchers said.

Instead, Li and his colleagues calculated that as the orbits of these globular clusters took them through the gaseous disks of their galaxies, the clusters could have collected or accreted enough stray gas and dust to trigger new waves of star formation.

"Traditionally, scientists did not expect that a young star cluster can form additional stars after its initial formation," Li said. "Our finding indicates that the evolution of a star cluster is much more complicated than what we thought — there must be frequent interactions between star clusters and their environment."

Future research will aim to extend the findings to other globular clusters in the Magellanic Clouds and the Milky Way, the researchers said.

The scientists detailed their findings in the Jan. 28 issue of the journal Nature.