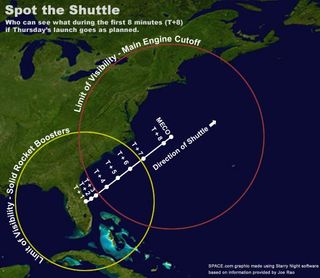 The range of visibility for skywatchers in the eastern United States during the planned evening launch of the Space Shuttle Discovery Dec. 7, 2006.

People in the eastern United States will get a great opportunity, weather permitting, to see the Space Shuttle Discovery launched into orbit Thursday evening.

The shuttle flight (STS-116) will be the 20th to rendezvous and dock with the International Space Station (ISS) and the glow of its engines will be visible along much of the Eastern Seaboard of the United States [Map].

To reach the ISS, Discovery must be launched when Earth's rotation carries the launch pad into the plane of the ISS's orbit. For mission STS-116, on Dec. 7 that will happen at 9:35:47 p.m. EST, resulting in NASA's first planned night launch since Nov. 23, 2002. This launch will bring the Shuttle's path nearly parallel to the U.S. East Coast.

For most locations, Discovery will be visible by virtue of the light emanating from its three main engines.  It should appear as a very bright, pulsating, fast-moving star, shining with a yellowish-orange glow.

Based on previous night missions, the brightness should be at least equal to magnitude -2; about as bright as the planet Jupiter [See Jupiter this month].  Observers who train binoculars on the shuttle should be able to see it resemble a tiny V-shaped contrail.

Discovery will seem to "flicker," then abruptly wink-out 8 minutes and 23 seconds after launch as the main engines shut-down and the huge, orange, external tank is jettisoned over the Atlantic at a point about 870 statute miles uprange (to the northeast) of Cape Canaveral and some 430 statute miles southeast of New York City.  At that moment, Discovery will have risen to an altitude of 341,600 feet (64.7 statute miles), while moving at nearly 17,000 mph and should be visible for a radius of about 770 statute miles from the point of Main Engine Cut Off (MECO).

Before hoping to see the shuttle streak across your local sky, make sure it has left the launch pad!  SPACE.com will carry the live NASA broadcast here.

In the table below, I have compiled a listing of visibility data for 25 cities.

If Discovery gets no higher than 5-degrees above your horizon, you may have difficulty seeing it because of low-lying haze, but give it a shot in any case.  Binoculars and a clear, unobstructed horizon will greatly help!

EXAMPLE: For an observer located in New York City, the Shuttle will make its closest approach, roughly 8.5 minutes after liftoff, at which time it will stand at a maximum of 8-degrees above the horizon at an azimuth of 129.6-degrees - or toward the SE horizon.

All Calculations by Joe Rao

(Added Dec. 6): I received a number of e-mails since we posted this story, from readers pointing out what they perceive as an error in terms of looking for the shuttle in the Northeast.  I suggested to look south-southwest, but many have written in asking if it should really be south-southeast?

No. The directions for the Northeast encompass southeast New York and most of New England.  In doing a description for such a wide-open viewing region, I had to paint with a rather broad brush.

So (for example) if you are looking to make your initial sighting of the shuttle (as it emerges from out of the haze/schmutz layer near the horrizon) . . . depending on where in the Northeast you are located . . . you should concentrate either on the south or south-southwest.  These correspond to azimuths of 180-200-degrees.  The later is especially true if you live, for example, on Cape Cod and the adjacent Islands; the former would be for New Jersey or New York.

Study the map again and you will see what I mean.

Of course, as the shuttle gets closer, the azimuths very quickly swing over to the southeast, where in most cases, the point of maximum altitude occurs (as was noted in the table).  I suspect most people will be scanning the horizon from south-southwest to southeast in the final couple of minutes of powered ascent . . . if so, you shouldn't miss out on sighting Discovery.-Joe Rao