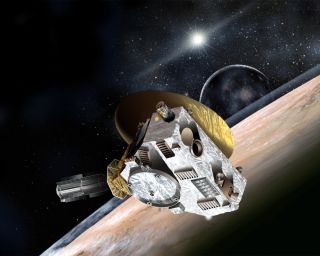 What a difference a decade makes. Ten years ago, Pluto was a blurry picture in even state-of-the-art telescopes. Today, we have high-definition photography flowing in from New Horizons' flyby in July 2015.

Tuesday (Jan. 19) marked the 10th anniversary of the launch of New Horizons from Florida. It took 9.5 years for the probe to reach Pluto, traveling 3 billion miles to its destination. And it's still operational today at the edge of our solar system.

"With that flyby, New Horizons completed a long-held goal of the scientific community and also five-decade-long quest by NASA to explore all the planets known at the start of the space age," New Horizons principal investigator Alan Stern, of the Southwest Research Institute in Colorado, said in a statement. [Destination Pluto: NASA's New Horizons Mission in Pictures]

When it launched, New Horizons made the fastest departure ever from Earth, at 36,000 mph. This was possible using a standard Lockheed Martin Atlas V with an unusually powerful third stage, supplied by Boeing.

The spacecraft got even faster when it made a pass by Jupiter in 2006, gaining another 9,000 mph. The Jupiter flyby also served as a practice run for the team to take pictures and do measurements with the spacecraft's instruments. Despite getting only a very quick look at Jupiter, New Horizons did find firsts: the first close-up look at lightning at Jupiter's poles, and the first sequence of pictures showing an eruption on the volcanic moon Io.

Pluto and its moon Charon began getting bigger in New Horizons' pictures in January 2015. At first the worlds were used for navigational purposes, but as New Horizons drew closer it was possible to see details of the terrain.

The probe is now speeding farther into the Kuiper Belt, and has been targeted to fly by another object in that belt in 2018, if sufficient funding is available.