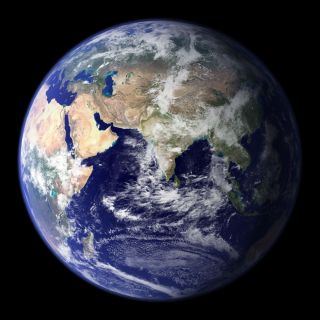 About 78% of Earth's atmosphere is made up of nitrogen.
(Image: © NASA)

We might commonly think of Earth as having an oxygen-dominated atmosphere, but in reality the molecule makes up only a fifth of our air. Most of what surrounds us is nitrogen, at 78 percent. Astrobiologists are beginning to see nitrogen — and not just oxygen — as a key indicator of a planet's habitability. Nitrogen is essential for life on Earth and could signal an atmosphere thick enough to stabilize liquid water on a planet's surface, fundamental to creating habitable conditions.

Nitrogen, in fact, was even more abundant in Earth's early atmospherewhen volcanoes and other internal processes began replacing our planet's original envelope of hydrogen and helium. The result of those geological processes, as well as the contributions added by early life, was the evolution of a "secondary" atmosphere made up of nitrogen, oxygen (mainly from photosynthetic life like plants), and trace constituents such as water and argon.

Here's the challenge to astrobiologists: nitrogen is hard to see even with sophisticated telescopes. Its chemical signature isn't picked up well by a spectrograph because nitrogen does not interact strongly with most wavelengths of light. Given that Earth-like planets have thin, hard-to-see atmospheres to begin with, finding nitrogen on these planets will be difficult. [10 Best Alien Planets to Search for Life]

But Edward Schwieterman, a doctoral candidate in astronomy and astrobiology at the University of Washington, and his collaborators have made a step forward. Schwieterman works with Victoria Meadows, the principal investigator of the NASA Astrobiology Institute's Virtual Planetary Laboratory.  A paper based on the research, "Detecting and Constraining N2 Abundances in Planetary Atmospheres Using Collisional Pairs," was published in August in The Astrophysical Journal. The research was funded by the NASA Astrobiology Institute  element of the Astrobiology Program at NASA.

Schwieterman approached the Earth as an exoplanet to serve as an analog for potentially habitable exoplanets in other solar systems. Most satellites happen to be in low Earth orbit, good for characterizing aspects such as weather or climate change, but hard to capture what you would see when a planet is viewed from a greater distance, where all the spatial information collapses to a point.

"If we were to directly image an Earth-like exoplanet, we would have a dot of light and no spatial information," Schwieterman said. "We need all the data of the Earth contained within one field of view and collapsed to a point to provide a useful comparison to future exoplanet observations."

The key to achieving this effect was viewing Earth from a distant spacecraft. The researchers chose data from EPOXI, a mission that repurposed the Deep Impact spacecraft (which imaged Comet 103P/Hartley from up close in 2010). EPOXI was far enough from Earth to see it as a disc. Controllers lost contact with EPOXI in 2013 and the mission was declared over, but the data survives.

Even though nitrogen is hard to see from afar, when nitrogen molecules collide with each other they produce a nitrogen-nitrogen pair that is spectrally active. This pairing was visible through the EPOXI spacecraft's spectrometer, but the researchers spent time making sure that this was not a fluke.

Since the spectral signatures of nitrogen collisions and carbon dioxide overlap, the researchers modeled different types of synthetic atmospheres using the NASA Astrobiology Institute's Virtual Planetary Laboratory's 3D spectral Earth model, such as doubling and halving abundances of carbon dioxide and nitrogen. Even after performing these changes, they still were able to see a valid signature of nitrogen at a light wavelength of 4.15 microns.

Finding nitrogen has an interesting implication for Earth-sized exoplanets. The definition of habitability is the presence of stable liquid water. We usually define a star's "habitable zone," for example, as the region around the star where liquid water could exist on a rocky planet's surface given a thick enough atmosphere. This is usually based on the amount of sunlight the planet receives from the star.

To get a clearer sense of habitability, Schwieterman pointed out, nitrogen could serve as an indicator for an atmosphere thick enough to maintain stable surface water. "If you don't have a thick enough atmosphere, then the water isn't stable on the surface. It evaporates into the atmosphere. If we can confirm other planets have a similar amount of nitrogen as the Earth, we can rule that possibility out." If other habitable terrestrial exoplanets are like the Earth, their atmospheres would be nitrogen-dominated.

An example of this is in our own solar system — on Mars. Billions of years ago, the planet had a thick enough atmosphere to support running water, as seen by the gullies imaged from orbit and the rocks picked up below that show signs of being soaked by it in the past. Today, however, the planet has a thin atmosphere. Why this happened is being investigated by NASA's MAVEN (Mars Atmosphere and Volatile Evolution Mission) spacecraft.

Recent work has shown that oxygen might not always be a reliable indicator of life. This is because a terrestrial planet with no life and insufficient quantities of "non-condensable" gases such as nitrogen can produce oxygen in its atmosphere through a process called photolysis. This could occur when water molecules (consisting of hydrogen and oxygen) high in the atmosphere of the planet are broken apart by sunlight, allowing the lighter hydrogen to escape and the heavier oxygen to be left behind. Others ways of producing abiotic oxygen have also been proposed.

"Directly detecting nitrogen would be a way to rule out the abiotic production of oxygen possible in thin, nitrogen-poor atmospheres and would be a stronger bio-signature than oxygen alone," Schwieterman said.

Schwieterman and his collaborators are interested in finding more ways to distinguish between the "false positive" oxygen produced by sunlight, and the biologically-produced oxygen seen on Earth.

"This involves both looking at planetary context, such as the planet's location in the habitable zone and the type of star it is orbiting, and using additional information about the planet's atmosphere and surface from spectroscopy," Schwieterman said. "The work on detecting nitrogen described in the paper is connected into that broader scope and shows that ruling out these false positive scenarios is possible."