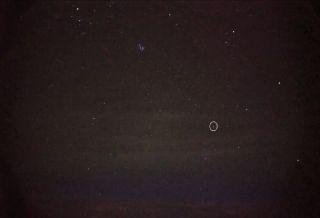 A high-flying balloon captured some dazzling video footage of the Quadrantid meteor shower as it peaked early Monday (Jan. 4), showing spectacular views of "shooting stars" from the stratosphere.

The video of meteors, as seen near the edge of space, is the first time that such faint meteors have been caught on camera, according to the research team behind the celestial feat. (Other research teams managed to capture only bright fireballs on camera.) You can see some particularly impressive meteors at the 6:40 and 7:08 marks of the nearly 10-minute video released by the Universidad Complutense de Madrid.

The Quadrantid meteor shower occurs each year in early January, when the Earth passes through a stream of dust left over from the asteroid 2003 EH1. The research team behind the new balloon video of the meteor shower has been making such expeditions for years to refine its detection technology.

"We have been doing these experiments since 2010, so we were able to explore different technologies and identify some problems," lead researcher Alejandro Sánchez de Miguel, a postdoctoral researcher in astronomy at the Universidad Complutense de Madrid, said in an email to Space.com.

To avoid fast spinning, which has been present in other efforts, Sanchez de Miguel's team used a passive stabilization method. They also aimed to use a highly sensitive camera.

The balloon lifted off from Trujillo, Spain, and soared to an altitude of 13.6 miles (22 kilometers) above Earth's surface. Its peak altitude was well above most of the atmosphere but still below a target altitude of 20 miles (32 km). (For comparison, the edge of space is generally considered to be about 62 miles, or 100 km, above sea level.)

"We had rain during the launch, so probably, the ice had damaged the balloon during the ascension," Sánchez de Miguel said. Its landing site was 78 miles (125 km) away, close to the town of Arroba de los Montes.

The high-altitude launch allowed researchers to soar above the clouds and the thicker part of the Earth's atmosphere. When the balloon was at altitude, the researchers pointed their cameras to the horizon, where the atmosphere is the thickest, for the best chance to see meteors and estimate their activity, Sánchez de Miguel  added.

The team plans to do more experiments in the coming months to get ready for the annual Perseid meteor shower in August. The Perseids are typically much brighter and better known among amateur stargazers than other meteor showers.