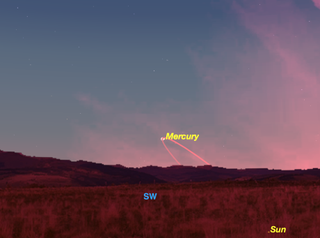 On the evening of Monday, Dec. 28, Mercury will be at greatest elongation eastward from the sun. It is seen here half an hour after sunset. This will be the last good opportunity to spot Mercury this year.
(Image: © Starry Night software.)

This week is your last chance this year to spot the elusive planet Mercury in the evening twilight sky.

Because Mercury never strays far from the sun, skywatchers get only a few chances each year to see the planet. This week marks one of its brief appearances. The very best viewing will be on Dec. 28, but the planet can be seen by skywatchers in the northern hemisphere a few days before and a few days after.

Not all appearances of Mercury are equal. The view of Mercury from Earth is very sensitive to the angle the inner planet's orbit makes with the local horizon. For this reason, a good apparition in the Northern Hemisphere usually means a poor one in the Southern Hemisphere. This week, Mercury is well-placed for northerners, but poor for those south of the equator.

In a few weeks, the situation will be reversed, and Mercury will be on the other side of the sun, well-placed in the morning sky for southerners, but poorly located for northerners.

I find it easiest to spot Mercury about half an hour after sunset, or half an hour before sunrise in the morning sky. Any earlier, and the sunlit sky swamps out the planet's dim light; any later, and it is lost in the trees on the horizon.

Mercury will be farthest from the sun on Monday, Dec. 28, but can be seen a few days before and after that date. I usually use binoculars to first spot the planet, sweeping back and forth parallel to the horizon to the left of the sunset point. Once located in binoculars, Mercury is usually quite easy to see with the naked eye.

Unless you are an early riser, this will probably the first time you've seen a planet in some months. Most of the planets have been on the far side of the sun recently, and are just moving into the morning sky. Jupiter is now rising around 11 p.m. local time, but the other bright planets aren't visible until early morning.

Mercury is usually a disappointing sight in a telescope: a tiny "half moon." However, it is an accomplishment just to have seen it. Many astronomers, including Johannes Kepler, have never managed this feat.