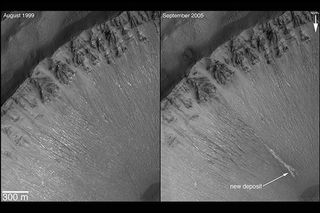 More than a decade ago, NASA’s Mars Global Surveyor returned stunning images of gullies shaped like water-carved streams on Earth, raising the prospect that Mars may be a friendly haven for life.

But appearances can be deceiving.

New research shows that the Martian gullies were much more likely to be sculpted by seasonal outbursts of dry ice -- frozen carbon dioxide -- than water.

"When dealing with other worlds, we must take care to remember that unfamiliar processes are possible and even likely in alien environments," planetary scientist Colin Dundas with the U.S. Geological Survey in Flagstaff, Ariz., wrote in a commentary in this week's Nature Geoscience.

The gullies, which appear in slopes around the planet’s mid-latitudes, have been a puzzle because modern-day Mars is too cold to support the amount of surface water needed to carve the features.

The gullies are relatively young, just a few million years old. Even more intriguing is that repeat imagery by a series of Mars orbiters shows some gullies are forming today.

Two French researchers believe they have the answer: seasonal pressure changes in pockets of dry ice trapped beneath the planet’s surface are periodically erupting, which disrupts the regolith and triggers debris flows.

The theory is not completely new, but Cedric Pilorget and François Forget, with the University of Paris-Sud, and Paris’ Pierre and Marie Curie University, respectively, flesh out the idea with some hard numbers.

Their new computer model calculates seasonal changes and impacts of an underlying layer of regolith, a carbon dioxide ice layer and the carbon dioxide-dominated gas atmosphere above. The simulation can take into account a variety of latitudes, slopes and other parameters.

The scientists found that most of the gullies could be created in a process that does not require any liquid water.

“Dry-ice-related processes seem to have played a more important role in the evolution of the martian landforms than previously thought,” the researchers conclude in a study published in this week's Nature Geoscience.

“The role of liquid water in gully formation should, therefore, be reconsidered, raising the question of the importance of its occurrence in Mars’ recent past,” they said.