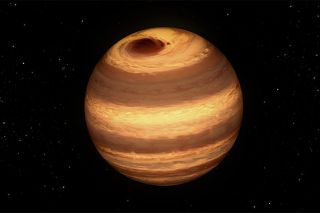 This illustration shows a cool star, called W1906+40, marked by a raging storm near one of its poles.
(Image: © NASA/JPL-Caltech)

Jupiter’s Big Red Spot is the largest example of a long-lived storm in the solar system, but now it has some pretty stiff competition in another star system. However, this “exo-storm” hasn’t been spied on another gas giant, it’s been spotted in the uppermost layers of a cool, small star.

L-dwarfs are a special subset of tiny stellar objects that possess both star-like and planet-like characteristics. Known colloquially as “failed stars,” brown dwarfs are too massive to be classified as planets, but they are too small to be clearly defined as stars. They form a bridge between planets and stars and can weigh-in at many times the mass of Jupiter (although their physical size is approximately that of Jupiter). They are celestial mongrels in a way; they have qualities of both stars and planets, but can be clearly defined as neither.

For example, although some of the more massive brown dwarfs (such as M- and L-dwarfs) can experience some low-level fusion in their cores (a star-like quality), it’s not enough to raise the object’s temperature beyond a couple of thousand degrees. Therefore, their atmospheres can become stratified (layered) and possess very planet-like phenomena such as clouds and, in this case, powerful storms.

NASA’s Wide-field Infrared Survey Explorer discovered W1906+40 in 2011 and astronomers realized that the object was within the field of view of NASA’s exoplanet-hunting Kepler Space Telescope. Usually, Kepler will look out for “transits” of exoplanets that orbit in front of their host stars — the slight dimming caused by the planet blocking star light causes a dip in brightness. But sometimes “starspots” can also be detected by Kepler — basically huge dark patches of magnetic activity in the uppermost stellar layers.

So, using Kepler, although the light generated by W1906+40 is faint, astronomers detected a huge dark patch rotate with the L-dwarf’s spin. Could it just be another star sporting a vast, dark cluster of star spots, like our sun does during periods of high magnetic activity?

To investigate, the researchers turned to another NASA mission for help: the Spitzer Space Telescope. And what they discovered may come as a surprise.

Viewing the brown dwarf in infrared light, Spitzer was able to determine that the large dark feature on W1906+40 isn’t driven by magnetism, so it isn’t a star spot, it’s actually an atmospheric phenomenon. It’s a big, dark storm near the north polar region.

“The star is the size of Jupiter, and its storm is the size of Jupiter’s Great Red Spot,” said John Gizis, of the University of Delaware, Newark, lead author of the study to be published in The Astrophysical Journal. “We know this newfound storm has lasted at least two years and probably longer.”

He added: “We don’t know if this kind of star storm is unique or common, and we don’t why it persists for so long.”

It goes to show that the moniker “failed star” may be a misnomer; perhaps brown dwarfs should in fact be known as “overachieving planets.”