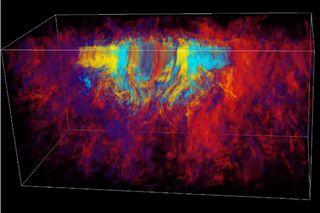 Screenshot of the turbulent conditions inside a core-collapse supernova simulation carried out by the Blue Waters supercomputer.
(Image: © Robert R. Sisneros (NCSA) and Philipp Mösta)

Although intense magnetic fields have long been assumed as the driving force behind the most powerful supernovas, astrophysicists have now created a computer model that simulates a dying stars' magnetic guts before generating a cosmic monster.

When massive stars die, they explode. But sometimes these stars really, really explode, becoming the most powerful explosions in the observable universe.

When a massive star runs out of hydrogen fuel, the intense gravity inside its core will start to fuse progressively more massive elements together. On cosmic timescales, this process happens fast, but as the star starts to try to fuse iron, the process comes to an abrupt stop. Fusion in the core is extinguished, and gravity wants to crush the core into oblivion.

Over a period of one second, the star's core will dramatically implode, from around 1,000 miles to 10 miles across, initiating the mother of all shock waves that, ultimately, rip the star to shreds. This is the short story: star runs out of fuel, implodes, shockwaves, massive explosion. All that’s left is a rapidly expanding cloud of super-heated gas and a tiny neutron star rapidly spinning where the star’s core used to live.

This model is all well and good for explaining how massive stars die, but occasionally astronomers see stellar explosions in the farthest-most reaches of the cosmos popping off with way more energy than can be explained by conventional supernova models. These explosions are known as gamma-ray bursts and it is believed they are the product of a very special breed of supernova — the HYPERnova.

Besides sounding like the next Marvel Comics movie baddie, a hypernova is the epitome of magnetic intensity. As a massive star’s core begins to collapse, it doesn’t only experience a rapid increase in density; the spin of the star is conserved, and, like an ice-skater who retracts her arms while spinning on the spot, the core of the collapsing star will rapidly "spin up" as it shrinks. Along with all this spinning violence, turbulent flows in the superheated plasma spike and the magnetic field of the star becomes extremely concentrated.

Until now, these effects of core collapse supernovas were pretty well understood — though firmly based in theory, observations of supernovae appear to provide observational evidence of this theory. But the mechanisms behind hypernovae (and gamma-ray bursts) haven't been fully appreciated, until now.

In a simulation using one of the most powerful supercomputers on the planet, an international team of researchers have created a model of a hypernova’s core, during collapse, over a fraction of a second as it erupts. And what they found could be the Holy Grail behind gamma-ray bursts.

The reason why gamma-ray bursts are so energetic is that it is believed that when a massive star collapses and goes supernova, something happens in the core that blasts matter and energy in opposite directions in two highly concentrated (or collimated) jets from the erupting supernova’s magnetic poles. Because these jets are so intense, should one of the beams from the hypernova be pointing at Earth, the signal gives the impression it was generated by a much more powerful explosion than a typical supernova can muster.

"We were looking for the basic mechanism, the core engine, behind how a collapsing star could lead to the formation of jets," said computational scientist Erik Schnetter, of the Perimeter Institute for Theoretical Physics in Waterloo, Ontario, who designed the model to simulate the cores of dying stars.

A way to imagine why these jets are so powerful would be to take a stick of dynamite and place it on the ground with a cannonball balanced on top. When the dynamite explodes, it makes a loud bang and might leave a small smoking crater in the ground, but the cannonball probably won’t move very far — it will likely jump a foot in the air and roll into the small crater. But place that same stuck of dynamite in a metal tube, block one end and roll the cannonball into the open end, as the dynamite explodes, all the energy is focused out of the open end, ejecting the ball hundreds of meters into the air.

Like our dynamite analogy, most of the hypernova’s energy is concentrated through the two jets -- contained inside magnetic "tubes". So when we see the jet pointing at us, it appears many times brighter (and more powerful) than the sum of its parts if the supernova ejected all of its energy omnidirectionally. This is a gamma-ray burst.

How these jets are formed, however, has largely been a mystery. But the simulation carried out over 2 weeks on the Blue Waters supercomputer, based at the National Center for Supercomputing Applications at the University of Illinois at Urbana-Champaign, has revealed an extreme dynamo, driven by turbulence, may be at the center of it all.

"A dynamo is a way of taking the small-scale magnetic structures inside a massive star and converting them into larger and larger magnetic structures needed to produce hypernovae and long gamma-ray bursts," said postdoctoral fellow Philipp Mösta, of the University of California, Berkeley, and first author of a study published in the journal Nature. "That kicks off the process.

"People had believed this process could work out. Now we actually show it."

By reconstructing the fine-scale structure inside a dying star’s core as it collapses, the researchers have, for the first time, shown that a mechanism called “magnetorotational instability” may be what triggers the intense magnetic conditions inside the core of a hypernova to generate the powerful jets.

Different layers of stars are known to rotate at different speeds — indeed, our sun is known to have differential rotation. As a massive star’s core collapses, this differential rotation triggers intense instabilities, creating turbulence that channels the magnetic fields into powerful flux tubes. This rapid alignment accelerates the stellar plasma, which, in turn, revs up the magnetic field a quadrillion (that’s a 1 with 15 zeros) times. This feedback loop will fuel the rapid release of material out of the magnetic poles, triggering a hypernova and gamma-ray burst.

According to Mösta, this situation is akin to how powerful hurricanes form in the Earth's atmosphere; small scale turbulent weather phenomena coalesce to form large-scale cyclones. Hypernova could therefore be imagined as the "perfect storm," where small-scale turbulence in a collapsing core drives powerful magnetic fields that, if the conditions are right, produce intense jets of exploding matter.

"What we have done are the first global extremely high-resolution simulations of this that actually show that you create this large global field from a purely turbulent one," Mösta said. "The simulations also demonstrate a mechanism to form magnetars, neutron stars with an extremely strong magnetic field, which may be driving a particular class of very bright supernovae."

Although digging into the guts of the most powerful explosions in the universe is cool in itself, this research may also go to some way of understanding how some of the heaviest elements in our universe formed.