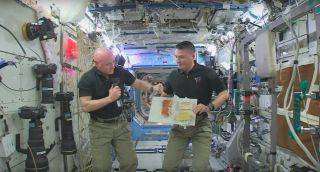 NASA astronauts Scott Kelly (left) and Kjell Lindgren show off their Thanksgiving meal aboard the International Space Station in this still from a NASA video.
(Image: © NASA)

Thanksgiving in space will be a lot like the holiday down here on the ground — minus the gravity, of course.

Like most Americans, NASA astronauts Scott Kelly and Kjell Lindgren have Thanksgiving (Nov. 26) off, and they'll spend the day aboard the International Space Station (ISS) watching football and enjoying a turkey-centric feast, agency officials said.

Kelly and Lindgren gave viewers a look at that feast in a special Thanksgiving video this week, breaking out bags of smoked turkey, rehydratable corn, candied yams and potatoes au gratin. Lindgren tore off a chunk of turkey and took a bite on camera. [Astronauts Send Thanksgiving Message from Space (Video)]

"We don't have much of this stuff, so I hope he enjoys that, because that was his Thanksgiving dinner right there," Kelly said.

The quip made Lindgren laugh, and he began to guffaw when Kelly sampled the candied yams, squeezing a healthy glob of orange goop out of a clear plastic bag.

"Man, they are delicious. Happy Thanksgiving, everybody!" Kelly said, then proceeded to perform a backflip. Lindgren waved, then did a forward somersault of his own.

Kelly and Lindgren are currently sharing the orbiting lab with four other spaceflyers — Japan's Kimiya Yui and cosmonauts Mikhail Kornienko, Oleg Kononenko and Sergey Volkov. Yui has the day off, while the three Russians do not. But all six crewmembers will gather for the Thanksgiving meal, NASA officials said.

Kelly and Kornienko are eight months into an unprecedented yearlong mission aboard the space station, which is designed to help NASA, the Russian space agency and their partners prepare for long-duration missions to Mars and other far-flung destinations. Lindgren arrived at the orbiting lab in July and is serving the usual 5.5-month stint.

In the video, Lindgren wished viewers a happy Thanksgiving and said he's thankful for his family, friends and the thousands of people at NASA and elsewhere who have made his mission aboard the space station possible.

Kelly said the views from orbit give astronauts "a different perspective on what it means to be citizens of planet Earth."

"Since I've been up here, we've seen so many bad things that often happen down there, we follow that on the news, and it just makes me really thankful to live in a country like the United States that provides us with freedom and opportunity," he said. "And for me, being a middle-class kid from New Jersey, to just have the privilege to come up here and represent my country like this. This is what I'm thankful for this Thanksgiving."