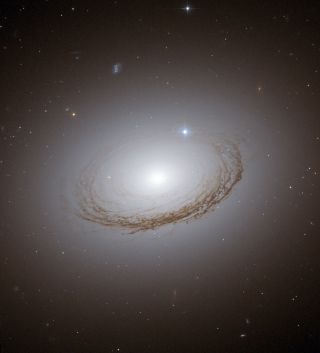 The NASA/ESA Hubble Space Telescope captured this striking image of the galaxy NGC 7049, with its dust lanes backlit by the stars in its central halo.
(Image: © NASA/ESA/W. Harris)

A previously unidentified highway of dust extends across the Milky Way, between the sun and the central bulge of the galaxy, scientists have found.

Called the "Great Dark Lane" by the astronomers who announced it, the dusty road twists in front of the bulge of the galaxy.

"For the first time, we could map this dust lane at large scales, because our new infrared maps cover the whole central region of the Milky Way," Dante Minniti, a researcher at Universidad Andres Bello in Chile and lead author of a study describing the findings, told Space.com by email.

The center of a spiral galaxy contains a collection of stars that bulge above and below the flatter spirals, much like an egg yolk. The arms that give the galaxies their classification twist around the bulge, often in a beautiful spiral (although sometimes they are more elongated). Lanes of dust often lie between these arms, which present a particular challenge to map out. [Stunning Photos of Our Milky Way Galaxy (Gallery)]

"It is very difficult to mapthe structure of our galaxy because we are inside, and it is very large and covered with dust clouds that are opaque in the optical," Minniti said.

Working with a team of astronomers, Minniti used the European Space Observatory's Vista Variables in the Via Lactea Survey (VVV), a project to scan the Milky Way using the VISTA telescope in Chile, to study the galaxy in the near-infrared. At this wavelength, telescopes are able to peer through the clouds of dust to a group of objects known as red clump (RC) stars lying within the bulge.

Red clump stars have helium-burning cores that generate a similar brightness no matter what their age or composition is. This makes them reliable distance indicators for astronomers.

Based on the measurement of 157 million stars, Minniti and his team found that the RC stars of the Milky Way's bulgewere split into two colors — a difference they determined was caused by dust between the stars and the observers. The astronomers could see a sharp transition between the two distinct groups — the dusty Great Dark Lane dividing them.

The Great Dark Lane extends approximately 20 degrees across the sky, reaching both above and below the plane of the galaxy. It sits roughly 15,000 light-yearsfrom the solar system, although the team is still working to refine the distance. It lies outside of the bulge rather than being contained within it, they said.

If the dust passed through the bulge itself, the red clump stars of the center would have a patchier distribution, rather than a clean break, as some of the stars at a certain height above the plane would be in front of the dust and others would be behind it, the researchers said. Instead, all of the red clump stars contained within the bulge lie behind the dust, according to the study.

"Detailed maps and modeling are needed in order to test this important galactic feature," the researchers wrote in their paper, which appeared in the journal Astronomy & Astrophysics last year.