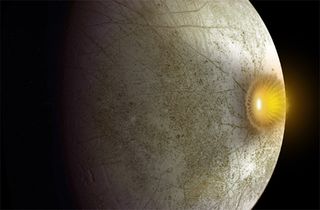 If alien life swims in the ocean beneath Europa's icy surface, it might have got its start from comets cracking the icy shell to deliver vital pre-life ingredients, say researchers.

New simulations show that a specific family of comets have the mass, velocity and opportunity to do the job -- penetrating the full range of likely Europan ice thicknesses.

"It's one of the best candidates for an ecosystem," said Rónadh Cox of Williams College, Mass., regarding Europa's ocean. "But how do you get biological precursers into the ocean?"

To find out if icy, chemical-rich comets could do it, she and her team modeled impacts by the full range of comets that have been influenced by Jupiter, and brought into relatively short orbits around the sun — so-called Jupiter Family Comets. The team simulated the collisions of these known comets into a range of ice thicknesses. Their results were surprising and led to a new insights into the moon's actual ice crust thickness.

"It turns out it doesn't matter how thick the crust is," said Cox, the lead author of a paper about the research in the latest issue of Journal of Geophysical Research-Planets. That's because it's all a matter of the frequency of impacts over the very long window of opportunity -- in this case the almost five billion-years that the solar system has been around.

If Europa's ice, for instance, is at the very thick end of the spectrum — 40 kilometers (25 miles) deep — it would require a 5 to 7-kilometer (3-5 mile) diameter comet to breach it, she said.

They found that the odds of that happening with a Jupiter Family Comet is once in 100 million years. That's a virtual certainty over five billion years.

The odds of getting through the ice get a lot better if the ice is thinner. Thinner ice would allow the more numerous smaller comets to break through the ice once every 10 million years, Cox explained.

"It means the crust is penetrated frequently in geological time," said Cox.

NEWS: Europa's Salty Ocean May be Seeping Through Icy Crust

It also means that the two dozen impact craters seen on Europa today can be compared to the simulated impact craters to see what size their impactors were. Those that left craters on Europa are failures, because if they had breached the ice they would have probably been flooded with fresh ice. So they provide a clue about how the thick the ice really is.

"We got the best match if ice was 10 to 15 kilometers (6 to 9 miles) thick," said Cox. This ice thickness agrees with other studies that estimate Europa's ice thickness by entirely different methods, she said.

"I think that this is the most complete and careful work yet on the relation between the Europan ice shell thickness and the size and depth of impact craters on its surface," said Purdue University's Jay Melosh, an expert on planetary impacts. "I am particularly impressed that the authors can match the observed crater depth-diameter relation over the entire range of crater sizes on Europa and get an excellent fit for a 10 kilometer (6.2 mile) thick ice shell. There has been a long-standing controversy over whether the ice on Europa is thin (that is, 7 to 15 km) or thick (around 40 km)."

PHOTOS: Where in the Solar System is it Possible for Alien Life?

As for those comets that broke the ice, Cox says the evidence for those is there on Europa's surface as well, although it's harder to be certain, as there are a lot more analogues for studying impact craters than for ice-penetrating impacts.

"If impactors are going through the ice there has to be a scar," Cox said. "Geomorphically, we don't know what that is. What do those look like now that they are frozen?"

They might look like the patchy, complicated Europan icescape called chaos terrain. Very similar looking surface patterns have been created by re-freezing of ice after explosives have been used to break through sea ice on Earth, Cox said. And that's about the only analogue she has seen for what has happened on Europa.

"We advocate that these are sites of impactors that penetrated the ice," said Cox.

If so, and the ice is on the thin side, it's good news for life on Europa and our chances of finding it.

"Cox and Bauer’s paper strongly supports the thin-shell side," said Melosh. "This is good news for the astrobiology community because it means that exchange of material between the surface and underlying ocean is relatively easy, so that nutrients for a putative Europan biosphere can get in and samples of that biosphere may be ejected to the surface, within reach of future sample return missions."