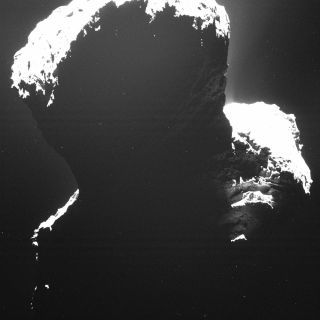 Comet 67P's "dark side," its southern polar region, as imaged by Rosetta's Optical, Spectroscopic and Infrared Remote Imaging System. This region, in shadow for 5.5 years, has only recently been touched by sunlight.
(Image: © ESA/Rosetta/MPS for OSIRIS Team)

For a long five and a half years, Comet 67P/Churyumov–Gerasimenko's southern side has been shrouded by darkness. Now, it's coming into the light, and new microwave images, taken before the big reveal, suggest that the comet's "dark side" may have a very unusual composition.

The European Space Agency's Rosetta probe has been orbiting and investigating Comet 67P since August 2014 with the help of its Philae comet lander. The probe pulled together the most detailed portrait ever of a comet, but had one particular blind spot: the comet's southern side, which is dark for over 5.5 years before a brief, searing-hot year in the light during the comet's closest approach to the sun. Until that time, only Rosetta's microwave instrument, MIRO, could make any sense of the blackness.

"We observed the 'dark side' of the comet with MIRO on many occasions after Rosetta's arrival at 67P/C-G, and these unique data are telling us something very intriguing about the material just below its surface," Mathieu Choukroun, lead author of the new study and researcher at NASA's Jet Propulsion Laboratory in California, said in a statement. [Spectacular Comet Photos from Rosetta]

The group investigated data from that region from August to October 2014, and found evidence suggesting a large amount of ice had built up. MIRO's measurements indicated that material very near the surface is transparent, probably consisting of water ice or carbon-dioxide ice. This is very different from the dusty surface elsewhere on the comet.

Potentially, the researchers said in the statement, the water and gases were released when the comet's south pole last saw sunlight, while the comet was closest to the sun. That material then condensed and coated the surface when the area plunged back into darkness. But there's no way to know exactly how that occurred until that region's shape is understood better, the researchers said.

"We plan to revisit the MIRO data using an updated version of the shape model, to verify these early results and refine the interpretation of the measurements," Choukroun said.

Luckily, there isn't long to wait: Data collected from May 2015 to early 2016 will reveal the full dark side at last. Once all Rosetta's instruments have been focused on that part of the comet, the whole story should be clearer.

Matt Taylor, Rosetta's project scientist, said in the statement that the probe has flown over the southern region several times since the area's summer began, especially around the time the comet was closest to the sun, Aug. 13 — which is when the comet shows the most activity.

"First, we observed these dark regions with MIRO, the only instrument able to do so at the time, and we tried to interpret these unique data," Taylor said. "Now, as these regions became warmer and brighter around perihelion, we can observe them with other instruments, too."

"We hope that by combining data from all these instruments, we will be able to confirm whether or not the [comet's] south pole had a different composition and whether or not it is changing seasonally," added Mark Hofstadter, MIRO's principal investigator.

The new research was recently accepted for publication in the journal Astronomy and Astrophysics.