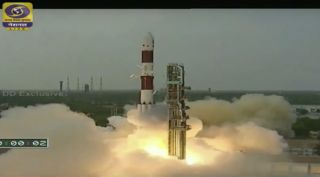 A PSLV lifted off Sept. 28 from the Satish Dhawan Space Centre and placed the 1,500-kilogram Astrosat into low Earth orbit.
(Image: © ISRO video)

The Indian Space Research Organisation (ISRO) said the 1,513-kilogram Astrosat spacecraft was healthy in orbit. Operating from an orbit of 650 kilometers in altitude inclined six degrees relative to the equator, Astrosat is expected to deliver optical, ultraviolet and X-ray images of black holes and other phenomena in a five-year mission.

Launched from the Satish Dhawan Space Center on India's east coast, the PSLV — which has developed a regular business in carrying foreign satellites into low Earth orbit — placed one Indonesian, one Canadian and four U.S. satellites into orbit. [India's First Mars Mission in Pictures (Gallery)]

Indonesia's LAPAN-A2 satellite was the biggest of the secondary payloads, weighing 76 kilograms and carrying an optical imager with a 4-meter ground resolution. The satellite was built by Indonesia's National Institute of Aeronautics and Space. It follows the LAPAN-A1 satellite that was built under the leadership of the Technical University Berlin, with Indonesian engineers trained in Berlin in satellite construction.

AIS is a capability common to all the secondary payloads on the Sept. 28 launch.

Spire Global of San Francisco, which is fielding a constellation of cubesats to deliver GPS signal-occultation data for commercial meteorological use, is including AIS payloads on its spacecraft.

Spire said it is the first U.S. cubesat owner to launch aboard the PSLV. Only recently, and with little fanfare, has the U.S. government relaxed its former policy of forbidding commercial satellites with U.S. parts to launch on India's rockets because India had not agreed to sign an agreement with the U.S. on commercial-launch pricing.

Skybox Imaging of Mountain View, California, owned by Google, has also contracted for multiple commercial imaging satellites to launch on the PSLV, and Airbus Defence and Space of Europe has launched the commercial Spot 6 and Spot 7 Earth-observation satellites, both with U.S. components, on PSLV rockets.

The 5.5-kilogram exactEarth-9 satellite was aboard the PSLV rocket. Com Dev recently pulled a proposed initial public offer of exactEarth stock, citing overall market conditions, but has told investors that exactEarth will still receive the funds it would have drawn from the stock issue in the form of continued investment from Com Dev and Hisdesat of Spain, which owns a minority stake in exactEarth.

The exactEarth EV9 satellite was injected into a good orbit, is healthy in orbit and is sending signals, company President Peter Mabson said Sept. 28.