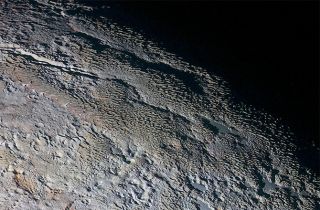 In this extended color image of Pluto taken by NASA’s New Horizons spacecraft, rounded and bizarrely textured mountains, informally named the Tartarus Dorsa, rise up along Pluto’s day-night terminator and show intricate but puzzling patterns of blue-gray ridges and reddish material in between.
(Image: © NASA/JHUAPL/SWRI)

If there’s one thing we’ve learned from NASA’s New Horizons flyby on July 14, it’s that we have a really incomplete understanding of planetary evolution. And now, in a new image release by the Pluto mission, there’s yet another landscape (actually, landscapes) that, for now, defies explanation.

In an eerie observation of Pluto’s terminator (the line that separates Pluto nighttime from sunlight on the dwarf planet’s surface) is a very alien-looking landscape with regular ripples that resemble the scale patterns on a snakeskin. The most exciting thing about this image is that, like most of the high-resolution views being beamed back from the Kuiper belt, planetary scientists only have a vague idea as to what might be going on. [On Pluto's Doorstep: Latest Photos by New Horizons Probe]

In short, it’s a conundrum, but it sure makes for an intriguing mystery.

While scientists ponder this latest stop on Pluto’s mystery tour, more stunning imagery has been downlinked, including the highest-resolution color view of Pluto yet, with zoomed-in potions of the tiny world’s heart-shaped region, on a plane informally called Sputnik Planum. You can get lost in the full-resolution image here.

The region, that has already been identified as possessing vast flows of exotic ices, also has what appear to be small rocky islands of material focused around the adjoining “cells” of icy material. Dunes, or features with a dune-like appearance, are also present. Closer analysis of these cells have revealed the icy surface is of a corrugated texture — another feature that is being explained by educated guesswork. Mission scientists think the texture may be down to sublimation processes — where ice is heated and turns into gas, creating Pluto’s thin atmosphere.

Additional information about the distribution of methane ices have also been acquired, presenting more questions than answers. One puzzle is that methane ices are abundant across Sputnik Planum’s planes, but mysteriously lacking from another large region informally called Cthulhu Regio. Besides Sputnik, methane ice seems to be abundant in brighter regions of the surface, accumulating in planes and crater rims. Inside craters, however, there’s none.

“It’s like the classic chicken-or-egg problem,” said Will Grundy, New Horizons surface composition team lead from Lowell Observatory in Flagstaff, Ariz. “We’re unsure why this is so, but the cool thing is that New Horizons has the ability to make exquisite compositional maps across the surface of Pluto, and that’ll be crucial to resolving how enigmatic Pluto works.”

We have only just begun exploring Pluto and its alien landscape and, as these new observations can attest, we are probably decades from fully appreciating the underlying dynamics that drive Pluto’s atmosphere and surface composition. And the best thing is that we’ve only just begun our tour of Pluto; New Horizons will continue to relay data to Earth well into 2016, revealing a surprisingly dynamic little world on the outskirts of the solar system.