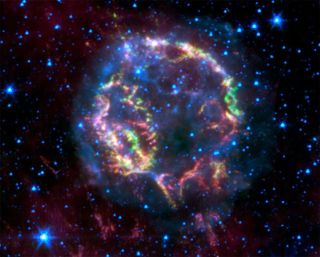 Stars don't always rip apart in violent explosions. Some blow up in an orderly fashion.

A star named Cassiopeia A blew up in such a tidy manner that it retained much of its original onion-like layering [image].

"We've found new bits of the 'onion' layers that had not been seen before," said co-researcher Lawrence Rudnick of the University of Minnesota. "This tells us that the star's explosion was not chaotic enough to stir its remains into one big pile of mush."

The work was led by Jessica Ennis, also of the University of Minnesota.

Cassiopeia A (Cas A) is a supernova remnant within our Milky Way Galaxy, located 10,000 light-years away in the constellation Cassiopeia. The original star, about 15 to 20 times more massive than our Sun, died in a cataclysmic supernova.

Like all mature, massive stars, the Cas A star was once neat and tidy, consisting of concentric shells made up of various chemical elements: The outer layers held lighter elements, such as hydrogen, the middle layers were lined with heavier elements like neon, and its core was stacked with the heaviest elements such as iron.

Until now, scientists couldn't figure out what happened to the star when it ripped apart. One idea purported the star exploded in a more or less uniform fashion, flinging its layers out in successive order. If this were the case, those layers should be preserved in the expanding debris. While previous observations revealed parts of some of these layers, others were missing.

Stellar material thrown out fastest hits the shock wave sooner, giving it more time to heat up to scorching temperatures that could be detected with X-ray and visible-light telescopes. More sluggish chunks hit the shock wave later so they are cooler and radiate infrared light that couldn't be observed until Spitzer came along.

The lagging chunks are made up of gas and dust containing neon, oxygen and aluminum - elements from the middle layers of the original star.

The study will be detailed in the Nov. 20 issue of the Astrophysical Journal.