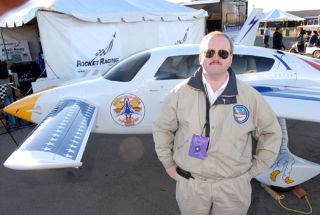 LAS CRUCES, New Mexico -- The dust hasn't yet settled at this year's Wirefly X Prize Cup, but both the event's founders and participantsare taking a look at next year's event and beyond.

The cup was founded by the creators the Ansari X Prize, the $10 million prize package offered to anyone who could launch a re-usable sub-orbital spacecraft, capable of carrying passengers, twice in a two week period.

The prize was won on October 4, 2004 by SpaceShipOne, a revolutionary spacecraft designed by maverick aerospace engineer Burt Rutan and financed by Microsoft co-founder and entrepreneur Paul G. Allen.

Building on the success of that competition, the WireFly X Prize Cup was launched in 2005. The two-day affair involves plenty of roaring rockets, privately-built spaceships and cash awards.

Nextyear's festivities will showcase the Rocket Racing League's X-Racer--a rocketplane powered by a powerful liquid oxygen/kerosene rocket engine. The RocketRacing League (RRL) is an aerospace entertainment organization which combinesthe competition of air racing with the excitement of rocketry.

XCORAerospace of Mojave, California is led by Jeff Greason, with his team providing theworkhorse engine for the Rocket Racing League. Their team is now busy at workon the engines, pumps and various components to assure the X-Racer vehicles areready for flight.

Greasonsaid they'll be busy wringing out technical and production bugs in an expansiveflight test program.

"There'sa lot to be said for the inspiration factor here. I think the biggest benefitfor what we do is that we sort of look like this garage operation. People havecalled us the cowboy space people," Carmack said.

Peoplelook at Armadillo Aerospace hardware and see that they can work on rocketry,too, Carmack explained: "It's not like the [NASA] space shuttle and all this 'shockand awe' of national pride."

Hiscompany's suite of rocket hardware shows that non-government groups can advancethe state of available space technology. "It's now approachable and can bebrought to a level that people can think: 'Hey, this is something I want to do.'"

XCOR'sGreason said the evolution of the private space industry is like a lot of othertechnologies--it's on an exponential growth curve. Therefore, there is nodefining breakthrough moment to spotlight. But things are accelerating, headded.

"Youcan look around and see a lot more happening this year than last year. And Ithink a lot more is going to happen next year," Greason observed. "I thinkpeople get excited about space again when they think some day they might get togo," he said.

"Explorationis a lot more interesting when you think," Greason said. "Some day, you andyour kids might get to go see those places that are being explored."

Asfor the future of the X Prize Cup, Homans said he wants to increase the numbersof kids attending the yearly event, from all states. Opening day of the WireflyX Prize Cup saw thousands of kids race through the gates.

"Thelook on the faces of the kids was just extraordinary. To me, that was sofulfilling in terms of what this is all about," Homans said. The aerospaceindustry desperately needs a new workforce, with so many now-working expertsretiring over the next 10-15 years, he said. "They need to get peopleinterested in math, science and engineering if we're going to be a leader."

Bythe spring of next year, full design of Spaceport America is to beconcluded, Homans said.

"Wewill begin construction by the end of 2007. This time next year we should beright on the verge of actually breaking ground at the spaceport. That's goingto be very exciting," Homans added.