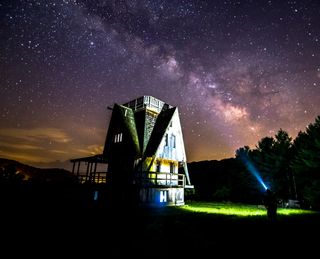 Sports photographer David Martin, an avid astrophotographer, captured this amazing view of a West Virginia house for sale with a Milky Way backdrop. Martin used a spotlight to illuminate the house in the view.
(Image: © David Martin/Night Watchman Photography)

The Milky Way arcs above a spotlight-illuminated house in a beautiful view captured by a veteran night sky photographer and self-styled "astro-paparazzi."

Virginia photographer David Martin took this photo of the Milky Way stretching over a house for sale in Monroe County, West Virginia, on the property of the Creekside Resort and Spa. By day, Martin is the sports editor of a weekly newspaper in Giles County, Virginia, but at night he scopes out local settings and posts photos of the stars to his Facebook page, Night Watchman Photography.

"It is one of the most interesting houses I have seen in the area," Martin told Space.com in an email. "When I first saw it on their website, I immediately knew that [it] needed some stars behind it (and hopefully the Milky Way center)." Around 10 p.m., as Martin waited with his fiancé and another photographer, the Milky Way showed up brightly enough that he didn't have to increase his camera's sensitivity as much as usual, he said. [See more breathtaking Milky Way photos]

With a camera that can do long exposures, a wide-angle lens and a tripod, it's not so hard to capture vivid images of the night sky, Martin said. For this image, he used a Canon 6D at ISO 4,000, and his wide-angle lens at 2.8, exposing for 20 seconds.

Martin actually got his start as a star photographer by mistake; he had been trying to take a photo of lightning bugs, and didn't even have a tripod.

"While I did get a lightning bug eventually, the capture of a star was completely unintentional, and that accident opened up a side of photography that I had never known about previously," Martin said. He quickly acquired a tripod and has become an avid sky photographer when conditions are clear, he said.

"I'm somewhat of an astro-paparazzi now in my constant pursuit of capturing the stars," Martin said.