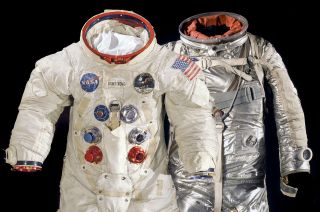 The Smithsonian's "Reboot the Suit" crowdfunding campaign has raised the $500,000 needed to exhibit Neil Armstrong's Apollo 11 spacesuit and is stretching to Alan Shepard's Mercury suit.
(Image: © Smithsonian via collectSPACE.com)

The Smithsonian's first-ever crowdfunding campaign to conserve, digitize and display astronaut Neil Armstrong's lunar spacesuit has rocketed to success and is now stretching to "reboot" other space history artifacts in the national collection.

The Washington institution's "Reboot the Suit" fundraising campaign soared beyond its $500,000 goal on Friday (July 24), just four days after being launched on the Kickstarter website. The sum, which represents pledges by more than 6,000 backers, was achieved 46 years to the day after the Armstrong suit (and the astronaut) splashed down back on Earth following the historic 1969 moonwalk.

"In the time it took the Apollo 11 crew to land on the moon and return safely back to Earth, we've accomplished our goal thanks to your phenomenal response and passionate belief in our mission," the curators and conservators at the National Air and Space Museum wrote on Kickstarter. "We can't wait to get to work on Neil Armstrong's spacesuit and bring it back to the museum, to the world, and most of all, to you." [The Voyage of Apollo 11 in Pictures]

Though Armstrong's suit and the others like it survived the trip to the moon, they were not designed to stand the test of time. Their subsequent five decades on Earth have left some of the garments' materials brittle and at risk of being further damaged. As a result, the bulk of the spacesuits in the Smithsonian's collection has been stored for the past 10 years or more for their preservation.

The "Reboot the Suit" project has now funded the state-of-the-art imaging and additional research needed to prepare Armstrong's moon dust-stained spacesuit for its temporary exhibition in time for the 50th anniversary of the Apollo 11 mission in July 2019. The spacesuit will then be placed on long-term display as a centerpiece in the National Air and Space Museum's new "Destination Moon" gallery, opening in 2020.

The $500,000 will also be used to acquire the display case and support structure that will duplicate the suit's current climate and exposure conditions for its preservation, and underwrite a complete 3D scan of the suit to produce new hands-on educational tools for students and educators.

"I want to thank all of you who have given so generously from the heart to help us conserve Neil's spacesuit. I can promise it will have great meaning and significance to our children, grandchildren and theirs. Now we're off to a great start, let's help us keep it going," said Apollo 17 astronaut Eugene Cernan, the last person to walk on the moon, in a video released by the Smithsonian.

Although the Armstrong suit conservation is now funded, the "Reboot the Suit" campaign still has almost two weeks to go before the project closes to backers on Aug. 19.

Like the Armstrong suit, Shepard's silver spacesuit is also destined for display in the new "Destination Moon" gallery, alongside his "Freedom 7" Mercury capsule. The $200,000 stretch goal will fund the Shepard suit's conservation and digital 3D scan.

Depending on how much they choose to give, "Reboot the Suit" backers receive various rewards, including patches, window decals, shirts and behind-the-scenes experiences with the National Air and Space Museum staff.

To mark the new Shepard suit stretch goal, new perks has been added, including "Reboot the Suit" logo emblazoned freeze-dried ice cream and more opportunities to see Neil Armstrong's spacesuit in-person before it goes on display in 2019.

"Let's keep the incredible momentum going and head from $500,000 to our next destination of $700,000 to tell Alan Shepard's story," the Smithsonian's curators wrote.

For more information or to pledge, visit the Smithsonian's "Reboot the Suit" campaign on Kickstarter.