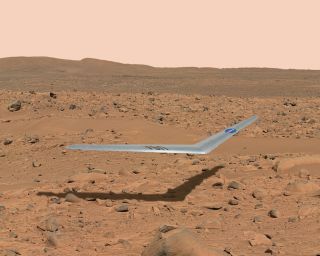 Artist's concept of a tiny glider cruising through the the skies of Mars.
(Image: © NASA Illustration / Dennis Calaba)

A tiny aircraft could be plying Mars' skies less than a decade from now.

NASA researchers are developing a glider, called Preliminary Research Aerodynamic Design to Land on Mars (Prandtl-m), for possible inclusion on a Mars rover mission in the 2022-2024 time frame.

Prandtl-m would weigh a maximum of 2.6 lbs. (1.2 kilograms) here on Earth (1 lb., or 0.45 kg, in Mars' reduced-gravity environment) and feature a wingspan of just 24 inches (61 centimeters), project team members said. The craft would fold up to fit inside a 3U cubesat — a spacecraft about the size of a loaf of bread — that would tag along with the rover. [History of Robotic Mars Missions (Infographic)]

"The aircraft would be part of the ballast that would be ejected from the aeroshell that takes the Mars rover to the planet," Prandtl-m program manager Al Bowers, the chief scientist at NASA's Armstrong Flight Research Center in Edwards, California, said in a statement.

"It would be able to deploy and fly in the Martian atmosphere and glide down and land," Bowers added. "The Prandtl-m could overfly some of the proposed landing sites for a future astronaut mission and send back to Earth very detailed high-resolution photographic map images that could tell scientists about the suitability of those landing sites."

The glider would have a flight time of 10 minutes in the Martian sky, and could cover about 20 miles (32 kilometers), Bowers said.

Bowers and his team plan to test a Prandtl-m prototype (which will be designed and built with the help of community college students this summer) during a high-altitude balloon flight later this year, either from Tucson, Arizona, or Tillamook, Oregon.

The balloon will drop the aircraft at an altitude of about 100,000 feet (30,480 meters), where the thin air provides a good analog of the Martian atmosphere.

"We could have one of two small science payloads on the Prandtl-m on that first balloon flight," Bowers said. "It might be the mapping camera, or one might be a small, high-altitude radiometer to measure radiation at very high altitudes of Earth's atmosphere. Eventually the aircraft may carry both of them at the same time."

A second balloon flight to about the same altitude is planned for 2016. In that test, Prandtl-m will be folded inside a cubesat container; after the drop, the glider will deploy from the container, unfold and fly away, Bowers said.

NASA's Flight Opportunities Program has agreed to fund both of these balloon-aided tests. If everything goes well, Prandtl-m may then find its way onto a sounding rocket that goes into suborbital space.

"If the Prandtl-m completes a 450,000-foot drop, then I think the project stands a very good chance of being able to go to NASA Headquarters and say we would like permission to ride to Mars with one of the rovers," he added.