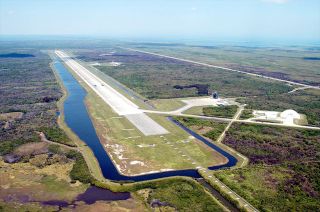 NASA has handed over its 15,000-foot-long Shuttle Landing Facility at the Kennedy Space Center to Space Florida for use as a commercial spaceport.
(Image: © NASA)

The Florida runway where space shuttles touched down for nearly 30 years has a new mission.

NASA on Monday (June 22) formally transferred control of the Shuttle Landing Facility located at the Kennedy Space Center to Space Florida, the state agency responsible for driving aerospace economic development. The agreement assigns the facility's operation and management to Space Florida for the next 30 years.

"This is a historic event for our state. With this agreement, Florida will gain access to both unrestricted airspace and one of the longest runways in the world, which will provide the Space Coast with a competitive advantage," said Gov. Rick Scott in a June 15 statement. [NASA's Space Shuttle Program in Pictures: A Tribute]

Space Florida intends to offer the Shuttle Landing Facility as a testing ground for new technologies and companies, including unmanned aerial vehicle (UAV) systems and a new generation of horizontal-launch space vehicles.

The Air Force has also stated it intends to use the runway to land its uncrewed X-37B Orbital Test Vehicle, beginning possibly with the end of the mini-shuttle's current mission, which launched in May.

Completed in 1976, the Shuttle Landing Facility (SLF) was first used to land a space shuttle eight years later on Feb. 11, 1984, when the orbiter Challenger returned to Earth to complete the STS-41B mission. That flight marked the first time that a spacecraft had landed at its launch site.

"We made a big thing out of it back then, that it was going to be the first [landing] at the Cape [Cape Canaveral]," said astronaut Vance Brand, who as commander was at Challenger's controls, in a 2002 NASA interview. "The Cape was a beautiful place to land, and we were very happy to get to be the first guys to do it."

In the 27 years that followed, 77 shuttle missions touched down on the runway, which was designated either 15 or 33 depending on the approach. The last orbiter to touch down on the SLF was Atlantis on the final shuttle mission, STS-135, on July 21, 2011.

The SLF also includes a parking apron and a 110-foot tall (33.5 m) air traffic control tower that features a 24-hour weather-observing facility and viewing stands for VIPs and the press.

Under the handover agreement signed Monday, NASA will continue to have use of the facility for aircraft operations.

"Following the final shuttle landing in 2011, the [SLF] has transformed into a multi-user facility supporting a variety of commercial and government partners," Robert Cabana, Kennedy Space Center director, stated. "We look forward to partnering with Space Florida to expand upon the multi-use of this historical asset."

In addition to shuttles and astronaut training jets, the SLF was used to support NASA's modified Boeing 747 Shuttle Carrier Aircraft (SCA) that was used to ferry the orbiters to and from Florida. The runway also hosted Virgin Atlantic's GlobalFlyer in the lead-up to its establishing a record for the longest flight made by any aircraft in 2006, and was used by NASCAR to test racecar aerodynamics.

Under Space Florida's control, the Shuttle Landing Facility may see future use by commercial spaceflight companies such as Sierra Nevada Corp. with its Dream Chaser lifting-body craft, XCOR with its Lynx piloted space vehicle, and Starfighters with its converted F-104 jet aircraft.

"The most storied runway in the world will now become the cornerstone of [a] next-generation commercial spaceport," Frank DiBello, the president and CEO of Space Florida, stated. "This marks the dawn of a new era for horizontal spaceflight in Florida and the country."

"The [SLF] will be converted into an economic engine that will bring more jobs to families in the Space Coast," Scott said, "and will help drive the next generation of spaceflight and discovery from Florida."