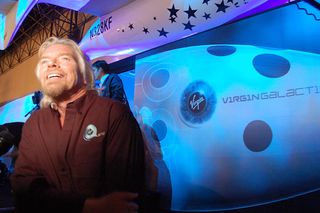 Sir Richard Branson at the unveiling of the mock-up of SpaceShipTwo at the Wired Magazine NEXTFEST, Javits Center, New York City
(Image: © Michael Soluri, for SPACE.com)

"It won'tbe much different than this," Branson told reporters here at WiredMagazine's NextFest forum. "It's strange to think that in 12 months we'll beunveiling the actual plane, and then test flights will commence right afterthat."

For aninitial ticket price of $200,000, Virgin Galactic passengers will buy a 2.5-hourflight aboard SpaceShipTwo and launch from an altitude of about 60,000 feet(18,288 meters), while buckled safely in seats that recline flat after reachingsuborbital space. A flight animation depicted passengers clad in their ownpersonal spacesuits as they reached a maximum altitude of at least 68 miles (110kilometers).

While thespacesuit designs are not yet final, they will likely be equipped with personaldata and image recorders to add to SpaceShipTwo's in-cabin cameras, Whitehornsaid.

"If it wasready next week, I'd be there," Alan Watts, who has traded in two million VirginAtlantic frequent flyer miles for a ride on SpaceShipTwo, told SPACE.com."I'm really looking forward to it."

Branson'sVirgin Galactic spaceliners are slated to roll out and begin test flights byearly 2008 in Mojave, California, with future operational spaceflights to bestaged from New Mexico's Spaceport America beginning in 2009.

"SpaceShipTwo is obviously designedas a commercial vehicle," Whitehorn said, adding that the vehicle will have adouble-skinned hull as added safety for the passengers and pilots inside itspressurized cabin.

Passengerswill have several minutes of weightlessness during the spaceflight, and thenhave about 40 seconds to return to their seats, Whitehorn said, adding that thefloor of SpaceShipTwo is also designed to be used during landing of spaceflyersfail to reach their spots in time.

WhiteKnightTwo carrier vehicles -which will be larger than a Boeing 757 jet - will also sport the same interiorof SpaceShipTwo, and will be used for to help train passengers during athree-day orientation period before launch, Virgin Galactic officials said.

StephenAttenborough, chief of astronaut relations for Virgin Galactic, toldSPACE.com that the advantage of two SpaceShipTwo pilots not only allowsfor redundancy, but frees one pilot to handle any passenger emergencies orissues that pop up during flight.

Whitehornand Branson both said that SpaceShipTwo will rely on a new type of hybrid rocketfuel, one slightly different from the rubber and nitrous oxide mixture thatpropelled SpaceShipOne into suborbital space three times in 2004.

TheWhiteKnightTwo will also rely on new, cleaner-burning jet engines and bear aclose resemblance to the Virgin GlobalFlyer aircraft, which was also built byRutan's Scaled Composites and flew around the world without refueling in 2005.

"If you'regoing to build a spaceship, you've got to build a green spaceship," Bransonsaid, adding that the carbon dioxide output from a single spaceflight is on parwith those of a business class seat aboard commercial aircraft.