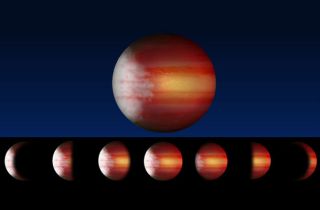 An artist's rendering of an exoplanet with cloudy mornings and clear, scorching afternoons, exhibiting a cycle of phase variations that occur as different portions of the planet are illuminated by its star, as seen from Earth.
(Image: © Lisa Esteves)

Now, researchers from the University of Toronto, York University and Queen's University Belfast have used precision data from NASA's Kepler Space Telescope to focus on six large exoplanets as they orbit their stars to seek out patterns in global weather patterns. And there appears to be a trend: Cloudy mornings that clear into midday, followed by extreme heating through the afternoon.

Of course, we're not talking about exoplanets resembling anything like Earth; these worlds are hot (over 1,600 degrees Celsius or 2,900 degrees Fahrenheit) and massive gas giants orbiting close to their stars. But the techniques used to gauge these alien weather systems could be used on smaller planets as our instrumentation becomes more sophisticated in the future.

To probe these worlds, the researchers observed the six exoplanets during different phases of their orbits. Like our moon has different phases depending on the angle of the sun illuminating its surface from Earth's perspective, distant exoplanets exhibit similar phases that can be detected from many light-years distant.

"We determined the weather on these alien worlds by measuring changes as the planets circle their host stars, and identifying the day-night cycle," said Lisa Esteves, of the University of Toronto and lead author of the study. "We traced each of them going through a cycle of phases in which different portions of the planet are illuminated by its star, from fully lit to completely dark."

Esteves' and her team's work is published in the May 12 edition of The Astrophysical Journal.

As planetary systems form around their stars, the planets in tow are predicted to rotate counter-clockwise, the right side moving in the direction of the planet's orbit. Therefore, in the case of these massive gas giant alien worlds, there is expected to be an eastward flow of atmospheric winds. The team found that the clouds forming on the exoplanet's night side are blown across the day side and then become heated where they rapidly dissipate. [Photos: Wildest Storms in the Solar System]

Interestingly, the team saw an excess in brightness in four of the worlds during their morning time and in the other two they spotted an excess brightness in the evening, both findings providing interesting clues to the nature of the atmospherics in the six exoplanets.

"As the winds continue to transport the clouds to the day side, they heat up and dissipate, leaving the afternoon sky cloud-free," said Esteves. "These winds also push the hot air eastward from the meridian, where it is the middle of the day, resulting in higher temperatures in the afternoon."

"By comparing the planets' previously determined temperatures to the phase cycle measurements provided by Kepler, we found that the excess brightness on the morning side is most likely generated by reflected starlight," said Esteves. "These four planets are not hot enough to generate this excess light through thermal emission.

"The excess light seen on the two very hot planets can be explained by thermal emission," she added. "A likely explanation is that on these two planets, the winds are moving heat towards the evening side, resulting in the excess brightness."

Although Kepler data has been used to measure the reflected and thermal brightness of exoplanets before, this is the first time the phase brightness variations in exoplanets have been measured to see the day-night cycle of exoplanetary weather dynamics.

"Upcoming space missions should reveal many more small planets around bright stars that will make great targets for detailed studies," said co-author Ray Jayawardhana of York University. "Someday soon we hope to be talking about weather reports for alien worlds not much bigger than Earth, and to be making comparisons with our home planet."