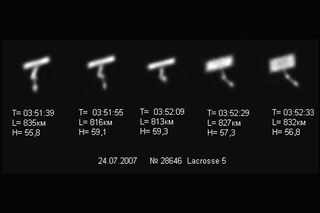 A team of scienitsts in Russia is using the Altai Optical Laser Center (AOLC) near Savvushka to track various spacecraft in orbit from the ground, including - it seems - a vintage U.S. spy satellite.

The intent of their work is to help solve problems in space surveillance. They report that the use of adaptive optics at AOLC allows the analysis of spacecraft that run into emergency situations. A paper authored by the Russian team is circulating in satellite-watcher circles. That paper contains a revealing look at one of their observational targets: the U.S. spysat Lacrosse 5.

It appears that Lacrosse 5 has a planar radar antenna, unlike the dish antennas of earlier Lacrosses, notes satellite watcher, Allen Thomson, who recently posted the Russian paper.

While once a hush-hush satellite, the NRO declassified the existence of the Lacrosse satellite constellation in 2008.

The Russian document also includes an analysis of the emergency with the Russian Mars-bound Phobos-Grunt probe that went awry shortly after launch in November 2011. It fell back to Earth in January 2012.