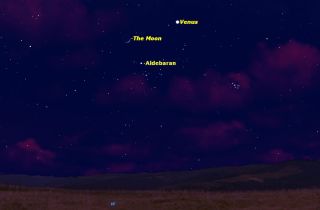 Venus and the crescent moon will be a dazzling sight in the western sky, weather permitting, about one hour after sunset on April 21, 2015 as seen in this sky map.
(Image: © Starry Night Software)

This evening will be another one of those special occasions when the two brightest objects in the night sky — the moon and a Venus — will get together and, weather permitting, will attract a lot of attention, even to those who normally do not spend much time in gazing up at the sky.

If your local weather is clear tonight (April 21), you're in for a celestial treat. Turn to face west about 45 minutes after sunset, during mid-twilight, and you should see a beautiful crescent moon and floating well off to its right is the dazzling evening star: the planet Venus.

And as the night gets darker, you might take note of another object, much dimmer than Venus, located to the lower right of the moon at roughly half the distance separating the moon and Venus. Shining with a distinct orange color, it's the 1st-magnitude star Aldebaran in the constellation of Taurus, the Bull. [Amazing Photos of Venus and the Moon]

Venus is the one object has been calling attention to itself as soon as the sun has slipped below the horizon. It currently dazzles in the western sky, about one-third of the way up from the horizon to the overhead point. Predictably, I've gotten quite a few inquiries about it in recent days. Typically they've gone something like this:

Venus is staying up late

Some folks are rather surprised when I tell them that Venus has been an evening object since mid-December. In at least two instances, I've had conversations with people who staunchly claimed that "Venus wasn't there just a week ago!" and that this is the first time that they've caught sight of it.

Of course, earlier in the year, Venus was considerably lower in the west-southwest sky, and setting much earlier in the evening (before 7 p.m. your local time). But now that we are more than a month into spring, with many states (save for Arizona and Hawaii) observing Daylight Saving Time, the viewing circumstances for Venus have changed for the better. Venus is now setting at around 11:15 p.m. local time for most observers.

But the best is yet to come!

On May 10, Venus will attain its highest declination: 26 degrees north of the celestial equator. Less than a month later, on June 6, it reaches its greatest eastern elongation (greatest angular distance east) of the sun of 45 degrees.

Roughly midway between these two extremes, for about two weeks beginning on May 17, Venus will be at the pinnacle of its current evening apparition. It will then be setting more than three and a half hours after local sunset. For New York City, for example, that corresponds to 11:44 p.m. EDT.

Interestingly, many astronomy books state flatly that you can't see Venus in the middle of the night. But thanks to Daylight Time, those places close to the western flank of a particular time zone will indeed be able to see Venus at the "witching hour."  From Pittsburgh, Venus won't set until 12:07 a.m., while from Terre Haute, Indiana — near the boundary line between Eastern and Central time — Venus won't set until 12:33 a.m.!

Editor's Note: If you snap an amazing photo of Venus and the moon tonight and want to share it with Space.com for a story or gallery, send comments and images in to managing editor Tariq Malik at: spacephotos@space.com.