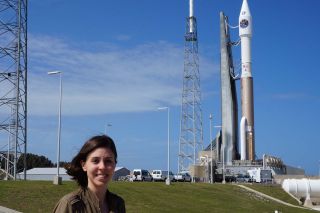 CAPE CANAVERAL, Fla. — In just hours, an Atlas V rocket will blast off from Cape Canaveral Air Force Station here, launching a scientific mission that will study colliding magnetic fields around Earth, but even before lifting off, the rocket is a sight to see.

The Atlas V rocket, built by United Launch Alliance, was rolled out onto the launch site here at Space Launch Complex 41 yesterday morning (March 11), while photographers, journalists and social-media representatives looked on. The payload fairing at the top of the rocket bore the logo of the Magnetospheric Multiscale mission (or MMS) which will study a phenomenon called magnetic reconnection in Earth's magnetic field. You'll be able to watch live coverage of the launch on Space.com, beginning at 8 p.m. EDT (midnight GMT).

After the rocket rollout, photographers were given the opportunity to set up cameras a few hundred feet from the rocket in order to catch up-close photos of the towering body leaving Earth. The photographers must leave their cameras at the launch site for more than 24 hours before the rocket takes off. The cameras are triggered by sound, so they start to snap photos when the launch begins. [NASA's Magnetospheric Multiscale Mission in Pictures]

In the humid Florida weather, there is always a risk that, without a photographer present, condensation or rain will fog a camera's lens, or that the camera will overheat and stop working. For that reason, the photographers create unique contraptions to protect the cameras as best they can. Some photographers used official-looking metal boxes, but others used plastic grocery bags, black garbage bags and poster board. One photographer built a container out of a plastic mailbox, which he wrapped in tinfoil to reflect sunlight and keep the temperature down.

The photographers must also secure their cameras and tripods so they don't tip over during or before liftoff. Many of the photographers used stakes to nail down their tripods like a tent; others tied the tripod directly to the old railroad track running through the launch site. One photographer hung a bag of rocks from the center of the tripod.

"Sometimes it works; sometimes it doesn't," said Ken Kremer, a freelance reporter and photographer who has photographed dozens of launches and chose to wrap his camera in plastic grocery bags. We'll be eager to see how the photos come out!