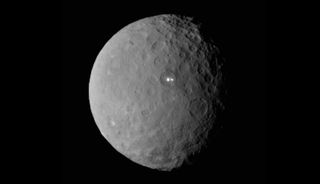 The intrigue surrounding Ceres continues to deepen as a NASA probe gets closer to the dwarf planet.

The new photos of Ceres from NASA's Dawn spacecraft, which is scheduled to arrive in orbit around Ceres on the night of March 5, reveal that a puzzling bright spot on the dwarf planet's surface has a buddy of sorts.

"Ceres' bright spot can now be seen to have a companion of lesser brightness, but apparently in the same basin," Dawn principal investigator Chris Russell, of UCLA, said in a statement. "This may be pointing to a volcanolike origin of the spots, but we will have to wait for better resolution before we can make such geologic interpretations." [How NASA's Dawn Mission Works (Infographic)]

"The brightest spot continues to be too small to resolve with our camera, but despite its size, it is brighter than anything else on Ceres," Andreas Nathues, lead investigator for the framing camera team at the Max Planck Institute for Solar System Research in Gottingen, Germany, said in the same statement. "This is truly unexpected and still a mystery to us."

Dawn will begin investigating the many mysteries of Ceres — the largest body in the main asteroid belt between Mars and Jupiter — in earnest soon enough. After reaching Ceres' orbit next week, the probe will spend about six weeks working down to its first science orbit, getting there on April 23.

Dawn will then study Ceres from a series of orbits until June 2016, when the $466 million mission will end.

The spacecraft orbited Vesta from July 2011 until September 2012, when it began the trek to Ceres. When Dawn gets there, it will become the first probe ever to orbit two different bodies beyond the Earth-moon system.

Dawn's spaceflight feats are enabled by its superefficient ion propulsion system, which accelerates ionized xenon gas out the back of the spacecraft to generate thrust.