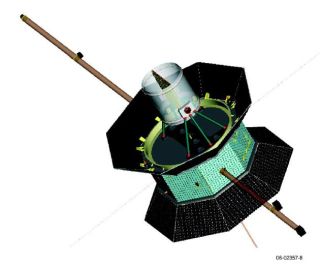 Artist conception of one of the four Inner Heliospheric Sentinels. They would face unique thermal and power challenges as they orbit close to the Sun, some well inside Mercury's orbit.
(Image: © NASA)

Now that NASA has settled on Lockheed Martin to build the Orion spacecraft that will propel the agency back to the Moon, officials are mulling a new fleet of vehicles to monitor potentially hazardous space storms that could turn such a mission into disaster.

The Solar Sentinels mission, only in an early discussion phase, would provide important data on heavy doses of solar radiation that can threaten astronauts and the electronic components of their spacecraft.

An astronaut on a spacewalk could become very sick, or even killed, by a large solar flare, scientists say. Advance warning of such storms will be crucial to anyone on the Moon or Mars, so they can take cover in time.

A storm in 1859 and another in 1972-the latter sandwiched between two Apollo missions-both could have been deadly, according to a NASA statement issued today.

Solar activity waxes and wanes in a roughly 11-year cycle. Right now the Sun is in a quiet period, but its Solar Cycle 24 is just beginning and will peak between 2010 and 2012.

"NASA astronauts are scheduled to return to the Moon around 2020," said Robert Lin, a solar physicist at the University of California, Berkeley. "We've got only one solar maximum left to learn what we need to know" to protect the crews.

Lin led a NASA commission that began in 2004 looking into the potential need for Solar Sentinels. Additional eyes in space are indeed needed, the group concludes in a new report.

The SOHO spacecraft already watches radiation storms lifting off the Sun, and the soon-to-launch STEREO mission will provided a better view in 3D.

But some scientists say more is needed to learn about the radiation threats to future explorers, who would be in space for months and venture beyond the relative protection offered by Earth's magnetic field to crews aboard the International Space Station.

One glaring hole is the hard-to-study far side of the Sun, where a solar storm can head undetected out to Mars during certain portions of that planet's orbit-such as when the two planets are on opposite sides of their parent star.

Solar Sentinels would consist of:

The mission would use existing technology to make it relatively easy to build quickly. NASA's Science Mission Directorate "is considering the Sentinels recommendations," according to the statement.