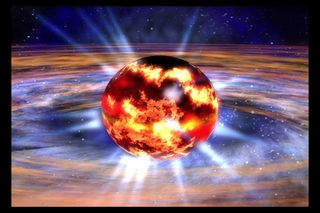 An artist's impression of a neutron star. The cosmic object's 'nuclear pasta' would be located between the crust and the outer core of the neutron star.
(Image: © NASA/Dana Berry)

The crusts of neutron stars — cosmic cousins of black holes — possess a weird form of matter known as "nuclear pasta."

Now, scientists have found that nuclear pasta may be even stranger than previously thought, forming defects that bond pieces together into complex, disorderly shapes. This complex nuclear pasta could ultimately doom the powerful magnetic fields seen from neutron stars, researchers say.

A neutron star, like a black hole, is a remnant of a star that died in a catastrophic explosion known as a supernova. Neutron stars are typically small, with diameters of about 12 miles (19 kilometers) or so, but they are so dense that a neutron star's massmay be about the same as that of the sun. A chunk of a neutron star the size of a sugar cube can weigh as much as 100 million tons, making neutron stars the densest objects in the universe besides black holes. [The Top 10 Star Mysteries]

In the base of the crusts of neutron stars, the nuclei of atoms get crammed together so tightly that protons and neutrons arrange themselves in patterns akin to pasta shapes. Sometimes, nuclear pasta comes in rods like spaghetti, flat sheets like lasagna or spirals like fusilli.

Nuclear pasta had been proposed by theorists years ago. In 2013, researchers experimentally detected evidence that this odd phase of matter actually exists.

"We are trying to determine ever more detailed properties of extremely dense exotic materials in stars," said lead study author Charles Horowitz, a physicist at Indiana University in Bloomington.

Since the scientists have no way of creating neutron-star matter on Earth, they relied on computer simulations of nuclear pasta. These involved nearly 410,000 nucleons — that is, protons and neutrons, the particles that make up atomic nuclei.

The investigators found that lasagna-sheet-like pieces of nuclear pasta could form long-lived defects shaped like corkscrews that connect these sheets.

"I have been trying for years to imagine neutron stars as geologic worlds with different kinds of nuclear rocks, faults, mountains," Horowitz said. "Then, one molecular dynamics simulation found a mistake — a defect in the otherwise regularly perfect pasta shapes that persisted for a very long time."

"X-ray observations of neutron-star crust cooling can provide information on exotic pasta phases buried a kilometer under the surface," Horowitz said. "These observations can then tell if the pasta is disordered and have low electrical and thermal conductivities."

The existence of complex, disorderly nuclear pasta "may tell us the fate of the huge magnetic fields in neutron stars, which can be a trillion or more times stronger than the Earth's field," Horowitz said. "If the conductivity is low, the great electrical currents supporting the fields may dissipate in about a million years."

The scientists will detail their findings in an upcoming issue of the journal Physical Review Letters.