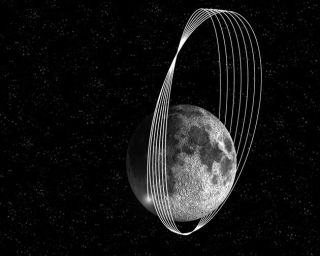 This artist’s impression shows the trajectory of the European Space Agency’s (ESA) SMART-1 spacecraft in the final phase of its mission, due to end through an impact on the Moon’s surface. Credits: ESA - C.Carreau

A European lunar orbiter is on track to hit the Moon over the weekend.

The controlled crash of the probe will occur September 2-3, coming to a "rest in pieces" site within the Moon's southern hemisphere called the Lake of Excellence.

The high-tech spacecraft-Small Missions for Advanced Research and Technology-belongs to the European Space Agency (ESA), and is better known as SMART-1.

For spacecraft operators to precisely pinpoint ahead of time the exact crash locale of SMART-1 would be a bit of dumb luck. Meanwhile, the call is out for professional and amateur skywatchers to monitor the result of the probe's purposeful suicide ending. It is not clear, however, what might be visible from Earth.

At present, the favored prediction is that SMART-1 spacecraft will impact the Moon's surface Sunday morning at 1:41 a.m. ET. However, it might hit roughly 5 hours earlier on its planned next-to-last orbit.

Predicted effects range from a quick flash to a possible fireball if the spacecraft ricochets across the lunar surface, due to leftover hydrazine fuel onboard SMART-1.

The high-speed slam dunk is expected to create yet another crater on the Moon-perhaps some 16 feet to 33 feet (5-10 meters) across. Dust and other material ejected off the Moon may well be visible to observers with big telescopes back here on Earth.

Experts are not sure how big a telescope would be required, but it is possible the event will be visible only to seasoned observers.

ESA engineers have been finessing SMART-1 during its extended mission to permit impact of the craft to happen on the Moon's near side-in a dark part near the terminator-good observation conditions for Earth-pointing instruments.

A last small maneuver of the orbiter took place at the end of July. That narrowed down the lunar grazing time to two possible timeframes-with vagaries due to uncertainties about the lunar topography.

"I am pleased that the SMART-1 mission and campaign can inspire the astronomers and the public worldwide to observe and rediscover the Moon," said ESA's Bernard Foing, SMART-1 Project scientist.

Foing told SPACE.com that SMART-1 is a precursor to the upcoming fleet of orbiters, "and we are conducting collaborations that will carry further the legacy."

For the SMART-1 impact campaign, Foing said other members of future impactor teams have been invited to take part. As example, he pointed to members of the Lunar CRater Observation and Sensing Satellite (LCROSS) effort.

LCROSS is a small, "secondary payload" that is hitchhiking its way to the Moon with NASA's Lunar Reconnaissance Orbiter, slated to fly in October 2008. It will arrive in the lunar vicinity independent of the larger orbiter.

The LCROSS mission is comprised of a Shepherding Spacecraft and a Centaur Upper Stage that separate as the hardware approaches the Moon's south pole. Sensors on the Shepherding Spacecraft will fly through a cloud of lunar material tossed up when the upper stage smacks into the Moon-all in the hopes of spotting signs of water ice and other compounds.

SMART-1 planners anticipated one recommendation in a Beijing Lunar Declaration that was produced at the July conference of the International Lunar Exploration Working Group. The declaration stated, among various items, that lunar missions should document their plans for end of life and coordinate impact observations from space and ground based facilities, Foing noted.

"We shall pass along our experience to those controlling orbiters at the end of their missions," Foing added.

ESA's SMART-1 mission launched to the Moon in September 2003, slipping into a lunar capture orbit in November 2004 to perform a host of science-gathering duties.