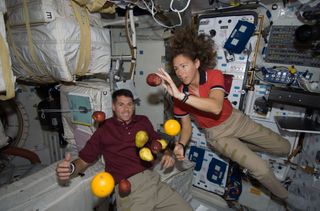 While people on the International Space Station (pictured here) will still float in microgravity, people on Earth will not be weightless on Jan. 4, 2015 as one Internet hoax claims.
(Image: © NASA)

Don't be fooled by a new astronomy hoax making the rounds on social media websites.

A widely shared story is claiming that Jan. 4 is "Zero Gravity Day," a date when people on Earth will be able to experience weightlessness while on the planet. The bogus post now appearing on Facebook and other websites at first blush looks legitimate. It shows a Twitter message sent at 3:27 p.m. on Dec. 14, 2014, seemingly posted by NASA (@NASA) and accompanied by the agency's official familiar red, white and blue insignia. The 135-character message reads:

"Jan. 4th, 9:47 a.m. PST, the long-awaited planetary alignment will cause a gravitational fluctuation that will leave you weightless for a short period of time #beready" [Fun in Zero Gravity: A Weightless Photo Gallery]

A Daily Buzz Live article then embellished that message, claiming, among other things, that a "rare planetary alignment" on Sunday (Jan. 4) will decrease gravity for five minutes, causing partial weightlessness.

The article attributed the details regarding this supposed alignment to the famous British astronomer Patrick Moore who supposedly stated,"At exactly 9:47 PST AM on Jan. 4, Pluto will pass directly behind Jupiter, in relation to Earth. This rare alignment will mean that the combined gravitational force of the two planets would exert a stronger tidal pull, temporarily counteracting the Earth's own gravity and making people virtually weightless."

According to the article, people on Earth could experience this "Jovian-Plutonian Gravitational Effect" by "jumping in the air at the precise moment the alignment occurred." If they did so, Moore supposedly said, they would experience a "strange floating sensation."

But this story is completely false. In fact, it is a repurposing of an old April Fools' Day joke told by Moore in 1976.

He did say it … but it's still untrue

Interestingly, many who heard that the "Zero Gravity Day" claims have been attributed to Moore were quick to point out that he could not have done so this year, because he passed away on Dec. 9, 2012. Notes Susan Rose, president of New York’s Amateur Observers' Society and a long-time friend of Moore: "Patrick must be turning over in his grave."

But as it turns out, he did make the claims nearly 39 years ago. However, it was a joke.

Moorewas a British amateur astronomer who attained prominent status in that field as a writer, researcher, radio commentator and television presenter. On April Fools' Day in 1976, Moore informed a local radio audience of the "Jovian-Plutonian Gravitational Effect," which would occur that very day at 9:47 a.m. He jokingly informed his radio audience that they would experience a strange floating sensation if they jumped in the air at that time.

Amazingly, within minutes after the appointed time, dozens of listeners had reportedly phoned in to say the experiment had worked!

Moore probably never would have dreamt that his radio prank would be recycled and appear before a worldwide audience on the Internet decades later.

No alignment and no gravitational tug

The claim that Pluto will pass directly behind Jupiter in relation to Earth is totally untrue. The hoax claims that this supposed alignment, with the resulting combined gravitational force of the two planets, would exert a stronger tidal pull, temporarily counteracting the Earth's own gravity and making people virtually weightless.

But the truth is Pluto and Jupiter are currently on opposite sides of the sky as seen from Earth. Pluto will be in conjunction with the sun on Saturday, while Jupiter will be at opposition to the sun just over a month later, on Feb. 6. To state that Pluto will pass behind the sun on Sunday is a complete fallacy.

And even if it were true that Jupiter and Pluto were to align, what would that do? Jupiter is 130,000
times more massive than Pluto, so the smaller planet wouldn't much change Jupiter's usual gravitational effects. And just how could all this supposed extra gravity somehow concentrate into a single minute of time?