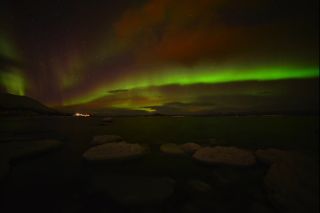 While lights decorating Christmas trees twinkle indoors, the stars of the Christmas sky shine brightly during the last week of 2014.

In many ways there are signs of the holiday season everywhere in the evening sky. At this time of year many observers hope to spot the Star of Bethlehem. If you look low toward the southwest horizon about 45 minutes after sundown, you’ll see a brilliant object that might remind you of that fabled apparition.  That bright cosmic object is actually the planet Venus, the brightest of all the planets and the third brightest object in our sky after the sun and the moon.

Interestingly, one year ago if you were looking low toward the southwest horizon right after sunset, you would have also seen Venus in pretty much the same position as it is this week. But there was a difference. Last year at this time, Venus was swinging around to a position that eventually would bring it between Earth and the sun in January, transitioning into the morning sky. Venus was also nearly twice as bright compared with now because it was much closer to us. If you trained a telescope (or even binoculars) on Venus at that time, you would have seen a large, slender crescent. [101 Amazing Skywatcher Photos of 2014]

Right now, Venus is somewhat of a disappointment even in a large telescope: It appears as nothing more than a tiny, albeit dazzling, circular blob of light.

But unlike last year, Venus is not making a quick exit from our evening sky. On the contrary, this is the beginning of a long, slow climb for Venus through the winter, on into the spring. By late May, it will have vaulted high into the western sky and won't be setting until around midnight.  And by early summer, Venus will once again resemble a large thin crescent for those using binoculars or a telescope. So for those who follow Venus, the best is yet to come!

Some may argue that in the story of the Star of Bethlehem, the Magi said that they had seen a "star in the east." Wait until around 10 p.m. local time and then cast your gaze low in the eastern sky. There you’ll see a brilliant silvery "star" shining with a steady glow. But that’s not a star, but another planet: Jupiter. The largest planet in our solar system is a superb telescopic showpiece with cloud bands crossing its disk, as well as its retinue of four large moons.

The Yuletide evening sky is especially rewarding now. The eastern sky is filled with brilliant stars — a celestial Christmas tree.

Many of these bright stars form asterisms, groupings of stars lying within or forming part of recognized constellations. Ranging in size from sprawling naked-eye figures to minute stellar settings, these asterisms are found in every quarter of the sky and at all seasons of the year.

The larger star groupings – ones like the Big Dipper in Ursa Major and the Great Square of Pegasus – are often better known than their host constellations.

One of the most famous asterisms lies in the northwest these frosty evenings. The brightest six stars of the constellation Cygnus, the Swan, compose an asterism more popularly called the Northern Cross.  Bright Deneb decorates the top of the Cross. Albereo, at the foot of the Cross, is really a pair of stars of beautifully contrasting colors: a third magnitude orange star and its fifth magnitude blue companion are clearly visible in even a low-power telescope

While usually regarded as a summertime pattern, the Cross is best oriented for viewing now, appearing to stand majestically upright on the northwest horizon around 8:30 p.m. local time, forming an appropriate Christmas symbol. Furthermore, just before dawn on Easter morning the Cross lies on its side in the eastern sky.

Look toward the southeast part of the sky about 8:30 p.m. local time and you might be able to see a large package in the sky, tied with a pretty bow across the middle, Four bright stars outline the package, while three close together and in a straight line make up the decorative bow. [Best Skywatching Events of December 2014: Sky Maps]

Tradition actually tells us that those seven stars formed a mighty hunter called Orion, the most brilliant of the constellations and visible from every inhabited part of the Earth. Two stars mark his shoulders, two more his knees and three his belt.

The legendary French astronomer Nicolas Camille Flammarion (1842-1925) referred to the three belt stars of Orion as "The Three Kings." And if we were to consider these three stars as representing the Magi, then not too far away, to the east, within the faint zodiacal constellation of Cancer, is the star cluster known as Preasepe, the Manger.

A manger is defined as a trough or open box in which feed for horses or cattle is placed. But the Bible also says that the baby Jesus, wrapped in swaddling clothes, was set down in a manger because there was no room at an inn. In our current Christmas week evening sky, Preasepe could represent the manger where Christ was born.

To the unaided eye the manger appears in the middle of the dim constellation of Cancer as a soft, fuzzy patch or dim glow. But in good binoculars and low-power telescopes, it is a beautiful object to behold, appearing to contain a splattering of several dozen stars. Using his crude telescope, the astronomer Galileo wrote in 1610 of seeing Preasepe not as one fuzzy star, but as "a mass of more than 40 small stars."

And lastly, in the predawn morning sky is "the lord of the rings," aka the planet Saturn, resembling a bright yellowish-white star which this week rises above the east-southeast horizon around 5 a.m. local time.

Saturn can be seen just before sunrise at about 20 degrees above the southeast horizon. Your clenched fist measures about 10-degrees across when held to the sky, so Saturn will appear about "two fists" above the horizon. A telescope magnifying 30-power or more will reveal Saturn's famous rings, now tilted 24.5 degrees to our line of sight.

Joe Rao serves as an instructor and guest lecturer at New York's Hayden Planetarium. He writes about astronomy for Natural History magazine, the Farmers' Almanac and other publications, and he is also an on-camera meteorologist for News 12 Westchester, N.Y.Follow us @Spacedotcom, Facebook and Google+. Original article on Space.com.