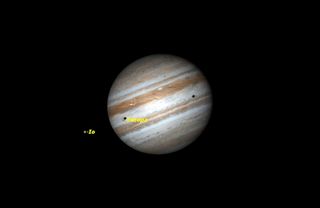 On the night of Dec. 15, skywatcher will see the moons Io and Europa cast their shadows on the planet Jupiter.
(Image: © Starry Night software)

Skywatchers with telescopes on Earth will be able to witness a remarkable cosmic event tonight (Dec. 15): Two of Jupiter's moons will cast shadows on the face of the gas giant in the same night.

As Jupiter's moons revolve around the gas giant, they regularly pass in front of the planet and cast shadows on its face. From time to time, the positions of the moons in orbit are such that two or three moons (and their shadows) can pass across Jupiter at the same time. Tonight, stargazers will have the chance to witness one of these double transits.

The shadows cast on Jupiter by the moons Io and Europa are very tiny. The transits will be visible only in telescopes with at least 90mm aperture magnifying at least 100 times. By the time Jupiter is high enough to observe, around 11 p.m. EST (0400 GMT), the show is about to begin. About 9 minutes after the planet rises, a tiny notch will appear on Jupiter's left limb, as the shadow of Europa begins across the huge planet's face. [Best Stargazing Events of December 2014 (Sky Maps)]

At 1:12 a.m. EST (0612 GMT), Io's shadow will follow Europa's onto Jupiter's face. Europa's shadow will be two-thirds of the way across Jupiter. A few minutes later, at 1:18, Europa itself can be seen crossing Jupiter, almost in front of Io's shadow. Although visible as a bright point of life for a few minutes, Europa soon blends into the background of Jupiter's clouds, visible only in very large telescopes.

At 2:02 a.m. EST, Europa's shadow passes off Jupiter, and at 2:15 a.m. EST, the moon Io itself begins across. But like Europa, it fades to invisibility a few minutes later.

If you miss this event, don't be too disappointed, because this is only one of a series of double transits, leading up to a rare triple transit on the night of Jan. 24.

These transits are predicted years in advance, and the predictions can be found in the Observer's Handbook of the Royal Astronomical Society of Canada, in astronomy magazines and online. The transits are also depicted by astronomy software programs like Starry Night, but there is something special about observing them with your own eyes through a telescope.

Editor's Note: If you capture an amazing photo of the double transit or any other skywatching image you'd like to share for a possible story or image gallery, please contact managing editor Tariq Malik at spacephotos@space.com.