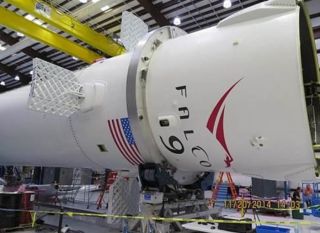 A close-up of the "hypersonic grid fins" on SpaceX's Falcon 9 rocket, which should help stabilize the booster during its return to Earth after launching on Dec. 19, 2014.
(Image: © Elon Musk/SpaceX)

SpaceX's next robotic cargo mission to the International Space Station — which will apparently feature a highly anticipated reusable-rocket test as well — has been pushed back by three days, to Dec. 19.

"The change of launch date allows SpaceX to take extra time to ensure they do everything possible on the ground to prepare for a successful launch," NASA officials wrote in a mission update today (Dec. 11). "Both the Falcon 9 rocket and its Dragon spacecraft are in good health."

If all goes according to plan, Dragon — loaded up with 3,700 pounds (1,680 kilograms) of food, supplies and scientific experiments — will blast off atop SpaceX's Falcon 9 rocket from Cape Canaveral Air Force Station in Florida at 1:20 p.m. EST (1820 GMT) on Dec. 19 and arrive at the orbiting lab on Dec. 21.

The launch will kick off SpaceX's fifth contracted cargo mission to the space station for NASA. (The California-based company holds a $1.6 billion contract with the space agency to make 12 such unmanned flights.)

Interest is especially high in this cargo flight, because SpaceX is apparently going to attempt something bold and dramatic with the Falcon 9: In October, the company's billionaire founder, Elon Musk, said that SpaceX will try to land the Falcon 9's first stage on a floating ocean platform during the rocket's next flight.

That next flight is the upcoming cargo mission.

The first-stage return is part of SpaceX's effort to develop fully and rapidly reusable rocket technology, which Musk has said could cut the cost of spaceflight by a factor of 100. SpaceX has already soft-landed a Falcon 9 first stage in the ocean on two other flights this year — but just on the water's surface, not on a floating platform.